Zimbabwe opposition call for 'biased' electoral body to be scrapped 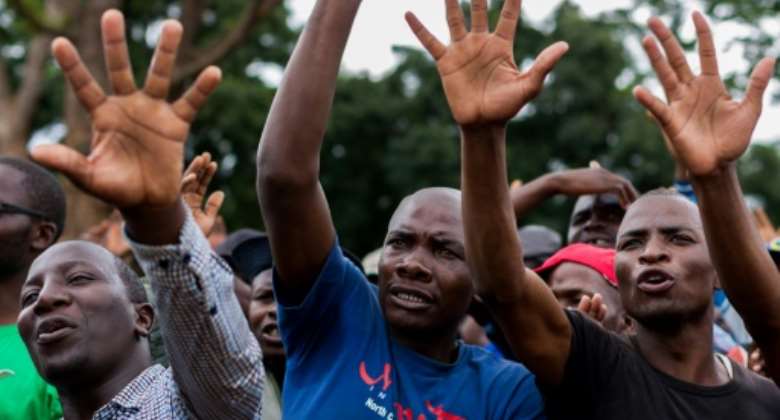 Supporters of Zimbabwe opposition leader Morgan Tsvangirai take part in a Harare rally by the main opposition parties calling for free and fair elections next year. By Jekesai NJIKIZANA (AFP)

Harare (AFP) - A coalition of Zimbabwean opposition parties on Wednesday staged a protest ahead of next year's polls, demanding the disbanding of the state-appointed electoral commission they accuse of hindering free-and-fair elections.

A group of around 200 protesters gathered at an open space outside the central business district after police banned a planned street march to the electoral commission head office.

"Having failed the fundamental test of impartiality and independence required of an election management board, the Zimbabwe Electoral Commission must forthwith be disbanded and dismantled," the parties said in a petition

Riot police armed with truncheons and water cannons patrolled the central business district to prevent the protest march that had been organised by a loose coalition of more than 10 parties that are demanding electoral reforms in the run up to next year's general election.

"This country cannot be a country that every time we go for an election it is contested and there is dispute," Tsvangirai told the protesters before representatives handed over the petition to the electoral commission.

"Why should we have a character of an election which is violent and which is always dependent on coercion and intimidation?"

Previous elections in Zimbabwe have been marred by violence against opponents of President Robert Mugabe as well as intimidation and alleged fraud including the stuffing of the electoral roll with phantom voters including names of long-deceased people and children too young to vote.

Former finance minister and leader of the People's Democratic party Tendai Biti called on opponents of veteran leader Mugabe to join forces and forge a coalition to fight his ZANU-PF party in next year's elections.

Zimbabwe's opposition parties are in talks to form an alliance to face ZANU-PF in next year's general elections.

Mugabe,93, who has been in power since independence in 1980, has been endorsed by his party to stand again in the polls.

His ZANU-PF party is entangled in bitter factional fights over who should succeed him.

Among other reforms the opposition parties want biometric voter registration to rid the electoral roll of phantom voters, fair media access to all political parties and the deployment of international observers to monitor the 2018 elections.