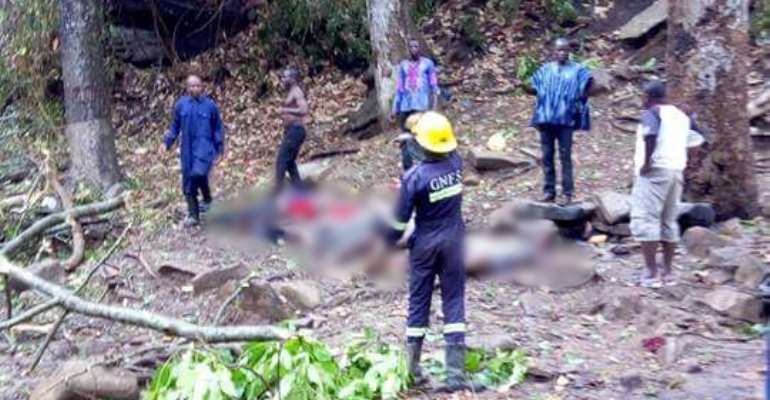 The Kintampo waterfalls tourist site in the Brong Ahafo Region has been closed down indefinitely, following Sunday’s incident that claimed the lives of about 18 students.

A statement issued by the Ministry of Tourism, Arts and Culture explained that the closure is to enable thorough security and safety checks at the site.

While calling on the Ghana Tourism Authority (GTA) to embark on a comprehensive safety audit of all major tourist sites in the country, the Ministry also revealed that it will fastrack its representation to Parliament for the passage of a Legislative Instrument to enable the GTA to regulate and certify these tourist attractions.

It further commended officials of the District Assembly, the medical staff of the Kintampo General Hospital, officials of the Police , Army, Fire Service, REGSEC and the Youth of Kintampo for their swift response to the disaster.

15 bodies retrieved so far
In a related development, 15 dead bodies of the affected victims of the disaster have been retrieved by their families.

The tragic event happened over the weekend when a rainstorm uprooted a tree which fell on the student revelers while they swam in the pond underneath the waterfall.

Chief Executive of the Wenchi Methodist Hospital, Kwesi Botchwey told Citi News the Police has conducted its autopsy and projects the results to be ready by Friday.

Meanwhile Minister of Tourism, Arts and Culture, Catherine Ablema Afeku has promised to enforce a Legislative Instrument (LI) to regulate and ensure safety measures at tourist sites to avert disasters.

According to her, the tourist sites will mostly be managed by the private sector when the LI is put in place.

Speaking on the Citi Breakfast Show on Monday, Madam Afeku said her outfit will start working on the LI immediately to prevent such occurrences.

“ …There needs to be an LI that we can regulate.The management and safety measures in tourist sites especially the ones that are being managed or co-managed by the assemblies, we want as many as we can, to go in the hands of the private sector because they are better positioned to handle some of these tourism sites and also it calls for a safety audit across the length and breadth of all tourist sites.”