Kintampo Again!! a Rainstorm, a Fallen Tree & a DISASTER

...How Nearly 20 youngsters lost their lives whiles on a Safari at Kintampo Falls (KTWF)
By Gordon Offin-Amaniampong 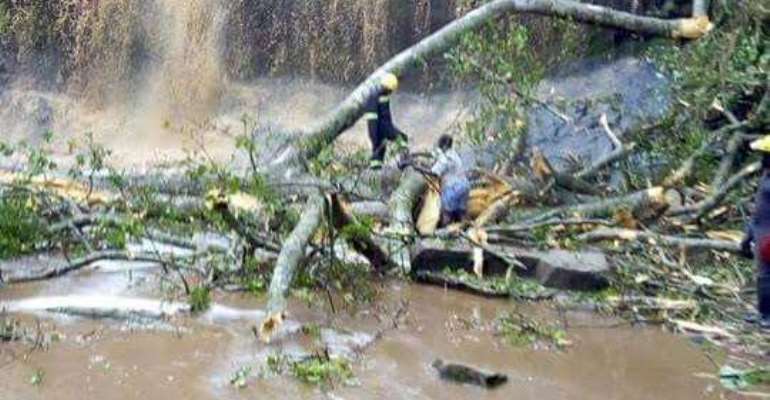 Perhaps they didn’t see it coming or they did but ignored the warning sighs. Or maybe it was too late for them to outrun nature. The monstrous storm that hit Kintampo and its environs on Sunday 19 March had caused a mighty tree nearby or on the hill to lose its grip--- killing 18 visitors at the quintessential waterfalls.

Amid the grief that has gripped the community parents and loved ones of the victims are still at a lost as to why such a tragedy could claim the lives of their sons and daughters, nieces and nephews, cousins, brothers and sisters and friends who were supposed to return home or to their respective schools after the day’s trip.

“It is really painful for your child to go to an excursion only to hear that a tragedy like this has happened to them. It is a great loss to the family and the country as a whole,” Madam Catherine Abelema Afeiku Minister of Tourism Arts and Culture expressed her sympathy for the bereaved family.

Her statement was contained in a release issued on Monday in Accra a day after the tragedy.

There had been outpouring of condolences and sympathies from across the country. Kwaku Asoma-Cheremeh the Brong Ahafo regional minister has expressed his condolences the bereaved families too.

“Ever since the falls was discovered, something like this has never happened before which make sit painful. The whole of Brong Ahafo is bereaved with the great tragedy that has befallen them,” he said. The Kintampo waterfalls which used to be called Sanders Falls during the colonial era is located on the Pumpum river—a tributary of the Black Volta about four(4) kilometres (2.5 miles) north of Kintampo Municipality.

It all happened at 4:30pm GMT local time----the afternoon the storm stormed the Kintampo Waterfalls. The afternoon the mighty tree c(name not yet known) couldn’t stand on her feet but fell on students, visitors, teenagers, youngster, males, females and future leaders who were believed to be swimming in the waterfalls. Some of them could have become engineers, scientists, policy makers, nurses, security personnel etc. but fate decided their fate and fate had it.

The dead are believed to be mostly students from the Wenchi Methodist Senior High School who were on an excursion to the well-known waterfall at the time. The Kintampo police said 18 students are dead 15 of them from Wenchi Methodist Senior High School and three from University of Energy and Natural Resources. Police had also confirmed that 30 others had been injured and receiving treatment at the town’s municipal hospital. Seven out of the number had severe injuries, while 11 with minor injuries.

In the meantime, victims’ relatives are said to be shuttling between the Holy Family Hospital in Techiman and Kintampo Government Hospital to identify the bodies of their loved ones.

It took a combined team of police and personnel from the Ghana National Fire Service and some people from the community to embark on the rescue mission and the search for the dead, according to the Kintampo police.

“We did our best to rescue the victims; however we had a very tough time doing so.” Assistant Divisional Officer Grade One Adu Kumi told a local radio station. It was difficult for us because the tree that fell was so huge, but with help of some residents in the area we were able to cut the tree to retrieve the bodies.”

So far information given suggests the disaster struck as a result of the rainstorm.

But what might have caused the huge tree to fall was it just the rainstorm?

Do officials at the site have any knowledge whether this was caused by a runoff or erosion?

Are there any indications that trees in the area are vulnerable to falling?

And if so what does this mean to tourists and visitors to the ideal site?

Do they follow weather reports what are the precautionary measures put in place?

Meanwhile, the Kintampo North Municipal Security Council has temporarily closed the Kintampo Waterfalls to public use following the Sunday’s accident. The move was first to allow for a combine team of security personnel to retrieve bodies that were still trapped under the tree and also to ensure that the place is safe for tourists who visit the area.

Chief Superintendent Desmond Owusu Boampong of the Kintampo Divisional Police Commander says the command will not disclose when exactly the place will be open for operations. ‘There was need for general assessment to be carried out at the place and also put in place measures to avert future occurrence” he said.

In another unusual twist to the disaster the authorities of the Wenchi Methodist Senior High School is reported to have revealed that KTWF was not part of the itinerary of students who had embarked on the excursion. The arrangement was for them to travel to the Mole National Park in the Northern region. The local media failed to name the headmaster of the school who’s purported to have made this startling revelation.

So, if KTWF wasn’t the planned destination for the excursion why then was the sudden diversion or change?

According to media reports the headmaster of the school said he was yet to be briefed on why those leading the excursion made up of 63 people including a driver and some teachers ‘decided to veer off the arranged plans which resulted in the death of the students’.

I should think someone or a group of persons must be held accountable. Investigations must be carried out as quickly as possible to ascertain the facts or otherwise of the allegation that the students were scheduled to visit Mole Park and not KTWF. I’m also of the view that anybody or group of persons found culpable must face the full rigours of the law.

The KTWF or Kintampo Waterfalls disaster reminds me of the Servol ferry accident. On April 16 2014 MV Sewol ferry capsized while carrying 476 people mostly secondary school students from Danwon High school killing 295 most of them students. There were 172 survivors and 9 missing.

On May 15, 2014 the captain of the ship and three crew members were charged with murder while other members of the crew were indicted for abandoning the ferry. An arrest warrant was also issued fur the owner of the ship. The captain was given life sentence, chief engineer 10 years, 12 years for 13 other crew members.

Indeed 18 students had perished .They must have run hard for their lives, they must have taken cover and they must have ducked very low for safety yet their efforts weren’t enough to save their precious souls. And Kintampo has done it again---- the ancient town that swallowed nearly 70 lives through motor accident one year ago.