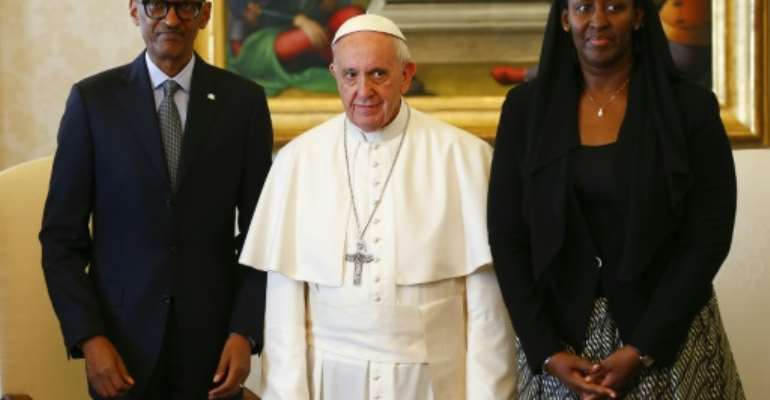 Pope Francis (centre) poses with Rwanda's President Paul Kagame and his wife Jeannette Kagame ahead of a meeting at the Vatican March 20, 2017. By TONY GENTILE (POOL/AFP)

Vatican City (AFP) - Pope Francis on Monday begged for God's forgiveness for "the sins and failings of the Church and its members" implicated in the 1994 Rwanda genocide that killed around 800,000 people.

The pontiff "conveyed his profound sadness, and that of the Holy See and of the Church, for the genocide against the Tutsi," the Vatican said in a statement following a meeting between Francis and the Rwanda President Paul Kagame.

"He implored anew God's forgiveness for the sins and failings of the Church and its members, among whom priests, and religious men and women who succumbed to hatred and violence, betraying their own evangelical mission," it said.

Francis's pardon plea followed a request from Rwanda in November for the Vatican to apologise for the church's role in the massacres.

Since the genocide, whose victims were mostly from the Tutsi minority, the Catholic Church has been accused of being close to the Hutu extremist regime in power in 1994.

A number of churches became scenes of mass killings as Hutu militiamen found people seeking refuge there, sometimes turned over by the priests, with no way out.

Francis, 80, said he hoped "this humble recognition of the failings of that period, which, unfortunately, disfigured the face of the Church, may contribute to a 'purification of memory'" and promote "renewed trust".

Several Catholic priests as well as nuns and brothers were charged with participating in the genocide and tried by the International Criminal Tribunal for Rwanda (ICTR) and by a Belgian court, leading to some convictions while others were acquitted.

The highest ranking Church official to be tried for genocide was the late bishop Augustin Misago, who was acquitted and freed from prison in June 2000.

During the 20th anniversary commemorations in April 2014, Kagame accused the Catholic Church of having "participated fully" in establishing the colonial ideology that created the divide between Hutus and Tutsis which he claimed led to the genocide.

In November, a letter of apology signed by the bishops representing the nine dioceses in Rwanda was read in all churches.

But the Rwandan government said the local apology was not good enough considering the crimes committed.

Around half of Rwandans are Catholic, but since the genocide many of them have turned to pentecostal churches.