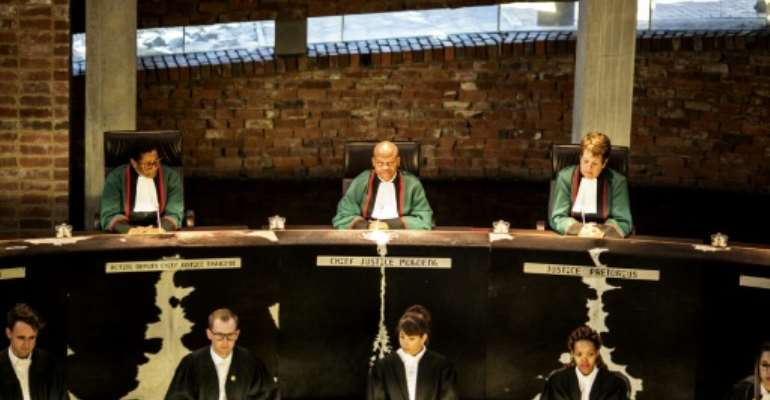 Johannesburg (AFP) - South African politicians traded accusations on Sunday over a mysterious break-in at the Johannesburg offices of the country's top judge a day after his court severely criticised the ANC government.

"My money's on Mahlobo... Intimidation of judiciary," Steenhuisen wrote on Twitter, vowing to fight against "corruption and abuse of state power."

"It is highly suspicious that the break-in occurred the day after the Constitutional Court handed down a damning judgement," a party statement said.

The ruling ANC accused the DA of "wild allegations (and) frivolous conspiracy theories" and called for police to track down the thieves.

The radical leftist EFF party also alleged Mahlobo was involved in the burglary.

Police described the break-in as "an attack on the judicial system" and vowed to catch the criminals.

The burglars reportedly only took computers from the human resources department, leaving other computers and valuables behind.

The theft occurred hours after the Constitutional Court, which is headed by Mogoeng, delivered a scathing ruling against the ANC government over welfare payments.

It criticised the "extraordinary conduct" of ministers, saying they had shown no interest in solving a contractual dispute that put at risk payments to millions of South Africa's poorest citizens.

On Sunday, the State Security Agency issued a statement dismissing "the baseless accusations made by some insinuating our involvement" in the break-in.

The burglary "should be a concern to all and not a matter of ridicule," it added.

The party, which led the struggle against apartheid, came to power in 1994 under Nelson Mandela but has lost support in recent years, posting its worst election results in local polls last year.

South Africa holds its next general election in 2019.

NDC Postpones Rawlings’ Probity And Accountability March To ...
5 minutes ago