Who Wins the Asawase Bye-Election? 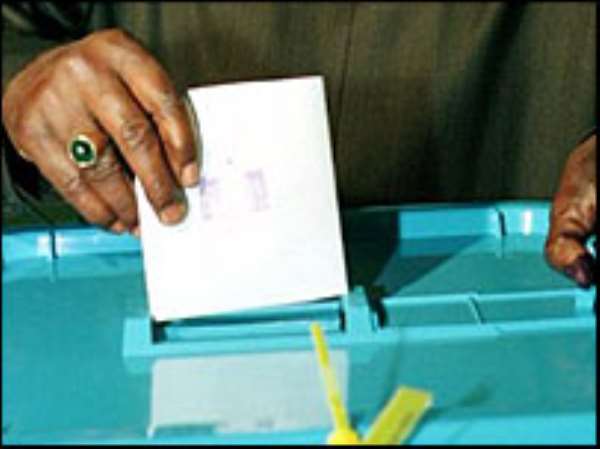 April 20 (Graphic) -- THE electorate in the Asawase constituency in Kumasi go to the polls today, in a by-election to elect a parliamentary candidate for the area. The Electoral Commission (EC) says voting starts at 7a.m. and ends at 5p.m. to be followed immediately by counting of votes at the various polling centres. Three candidates are contesting the seat, left vacant by the death of the former NDC MP, Dr Adamu Gibrine. They are Alhaji Shuaibu Musah Shariff of the NPP, Alhaji Muntaka Mohammed Mubarak of the NDC and Mr Ibrahim Mohammed Issaka of the PNC. EC officials have promised tight security to prevent any nasty incidents. They said the tight security arrangements stemmed from the tension that characterised the build up to the election. According to the commission, Asawase had become a volatile spot, and nothing would be left to chance to ensure a peaceful election. Last Tuesday witnessed some disturbances between NPP and NDC supporters at Aboabo No. 2, and police had to fire warning shots to contain the situation. Four persons alleged to be NDC supporters were injured. and were treated and discharged at the hospital. Before this incident, at least two other incidents were recorded in other parts of the constituency, but on those occasions no injuries were recorded. Campaigning for the election was very intense, as leaders from the parties' headquarters' in Accra moved to Kumasi to join forces with the local groups. From all indications the contesting parties were out to undo each other in a bid to woo the electorate to their side. In the 2004 parliamentary election, the NPP fielded a non-Muslim woman to contest the seat and lost by more than 4,000 votes to the late Dr Gibrine of the NDC. For the NPP, they realised they made a mistake in the 2004 elections, and therefore decided to put up a born and bred Muslim from the area in the person of Alhaji Shariff. The NPP is therefore very sure that this time round, it would win the seat, especially against the background of the exhaustive campaign it had undertaken in the area. But the NDC is even more convinced that it stands the chance of winning by a bigger margin than the last election. According to party officials, the people of Asawase had come to terms with the hardships unleashed by the NPP on Ghanaians, and were not in anyway ready to vote for its candidate. Alhaji Mubarak, the NDC candidate is 34 years, and the youngest among the contestants, and to the party his youthful exuberance is an added advantage. For the PNC, they are drumming home the point that the NDC and the NPP are violent parties, who should not be entertained in any way. Party officials contend, therefore, that the electorate should reject the two parties and rather vote for the PNC to bring unity to the people.

PPP calls for constitutional amendment before election 2024
2 minutes ago