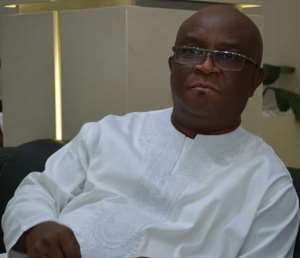 Staff of the various district assemblies in the Volta Region will face disciplinary actions if they absent themselves from work indiscriminately without permission from their superiors.

Those who would also absent themselves from important functions organised in the region without reasonable excuses would also not be spared, Volta Regional Minister, Dr. Archibald Yao Letsa, has warned.

This, according to him, formed part of counter measures to reverse the region's poor performance in the annual District League Table (DLT) over the years.

Dr. Letsa gave the warning at the launch of the 3rd Ghana District League Table for 2016 in the Volta region.

According to him, the DLT is an important assessment process that should be taken seriously by every Ghanaian, because it's not different from similar assessment carried out in the health sector.

Dr. Letsa expressed worry about the poor performance of the region in the national ranking and called for support from all to improve the situation.

“I am worried that when assemblies are graded at the national level, the region is not able to pick prizes. I call for support from everybody to move the region forward. We should come together and fight for the collective interest of the Volta Region,” he added.

Dr. Letsa also expressed commitment to implementing the 2016 manifesto of the New Patriotic Party (NPP), promising to work to change the attitude of staff of the various assemblies.

The District League Table is a social accountability initiative introduced by the Centre for Democratic Governance (CDD-Ghana) and the United Nations Children Emergency Fund (UNICEF-Ghana) with support from the Ministry of Local Government and Rural Development to assess the level of development and service delivery in all 216 districts in the country.

The Kpando Municipality ranked first in the region but took the 52nd position in the national ranking.

The North Tongu District came last in the regional and national rankings.