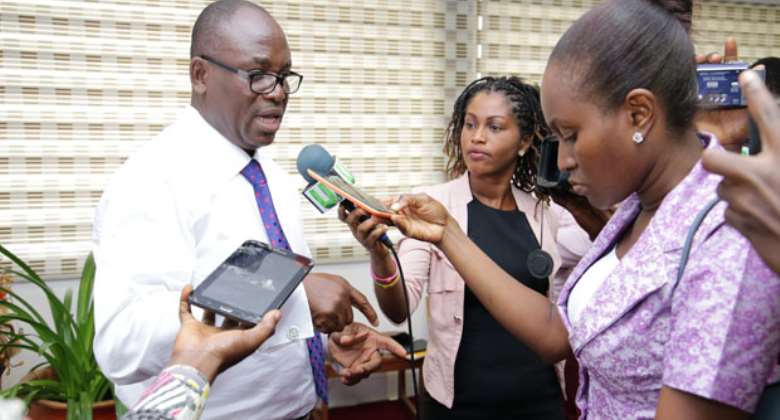 The Acting Director General of GPHA addressing the media

Ghana Ports and Harbours Authority (GPHA) would review all contracts signed during the tenure of the previous Mahama administration, Acting Director General of the authority, Paul Asare Ansah, has stated.

According to him, the decision stems from the fact that the authority wants value for money to promote the interest of the nation.

Although he did not state the contracts, which would be reviewed and when they would be reviewed, Mr Asare Ansah said all the agreements would be subjected to rigorous review, and if possible, abrogate those that would not be in the interest of the nation.

Currently, some Private-Public Partnership (PPP) agreements signed by GPHA for the Tema Port Expansion Project are said to have reduced government's full operation of the port to 30 percent, with international partners holding 70 percent share of the agreements for 35 years.

This is said to have adversely affected revenue generation at the port.

But Mr. Ansah, speaking to a section of the media during a visit to the facilities at the Tema Port by the Parliamentary Select Committee on Trade, Industry and Tourism, stressed that all contracts would be subjected to rigorous review to determine those that are in the country's best interest.

A partner recently won a $1.5 billion contract for the port expansion, as well as expansion of the Tema Motorway.

“So we will look at the totality of the package of all the projects and see whether the conditions that are spelt out are entirely in our interest or not. If they are not, what has to be done to secure the interest of our country better than it is will be done.”

In the future, Mr. Ansah noted that GPHA would raise funds with the establishment of Ports Infrastructure Development Fund in partnership with the local private sector to develop the ports.

Touching on the authority's future plans, he said his outfit might consider reviewing its legal mandate to make the GPHA stronger in terms of administration in order to meet international standards.