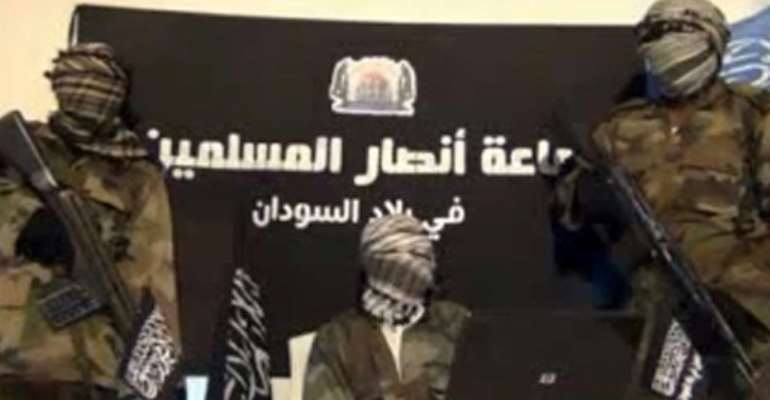 The radical Islamist group Ansaru was formed as a Boko Haram splinter group in 2012. By (JAMA'TU ANSARUL MUSLIMINA FI BIL/AFP)

Abuja (AFP) - The leader of Boko Haram splinter group Ansaru appeared in court in the Nigerian capital Abuja on Tuesday charged with the abduction and murder of 10 foreigners.

Khalid al-Barnawi, one of three Nigerians listed by the US government as a "specially designated global terrorist", appeared alongside six other defendants, including his second wife.

All pleaded not guilty and all seven were remanded in custody until a further hearing on April 11.

The charges relate to the abduction and murder of foreign workers in Nigeria between 2011 and 2013, including Italian engineer Franco Lamolinara and his British colleague Chris McManus.

Both were killed by their captors in the northern city of Sokoto just moments after the start of a joint British-Nigerian rescue operation at the compound where they were being held.

Barnawi is also accused over the kidnapping of Frenchman Francis Collomp and German national Edgar Raupach.

Collomp was kidnapped in December 2012 and held by Ansaru for nearly a year before he managed to stage a dramatic escape in November 2013.

Raupach's abduction was initially claimed by Al-Qaeda in the Islamic Maghreb to which Ansaru has been linked. He was killed during a military raid in Kano, northern Nigeria, in May 2012.

The other kidnapping and murder charges relate to seven foreign nationals -- two from Lebanon, two Syrians, an Italian, a Greek and a Briton -- who were seized in the northern state of Bauchi in 2013.

According to the charge sheet, the seven were taken to the Sambisa Forest area of Borno state, in northeastern Nigeria, and held for about 10 days before they were killed.

They were then buried in a shallow grave, the charge read.

Nigeria's military announced in April last year that Barnawi was arrested in the capital of Kogi state, in central Nigeria, and described him as "on top of the list of our wanted terrorists".

The group, also known as Jamaatu Ansarul Muslimina Fi Biladissudan ("Vanguard for the Aid of Muslims in Black Africa"), specialised in high-profile killings and attacks on foreigners.