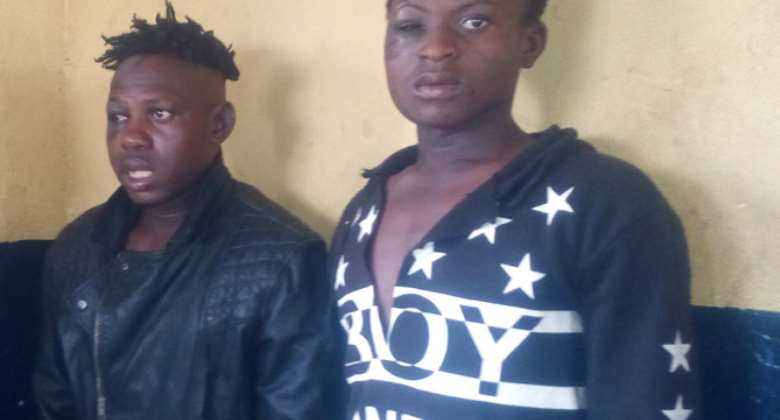 The suspects in police custody

The Darkuman Police have arrested two suspected armed robbers who allegedly snatched the bag of a lady who was returning home after an all-night service along the official Town Road.

The two are Ayamga Ibrahim, 18, a porter at Kantamanto and Amadu Seidu, 28, mechanic.

The two attempted to escape using a motorbike but they were nabbed with the help of a fearless taxi driver, who shoved them off the motorbike with his taxi.

They landed in the middle of the road and were subsequently arrested.

The brave taxi driver in charge of a Hyundai i10 identified only as Kofi Soboji, damaged his front headlight in the process.

The two are in the custody of the police assisting in investigations.

Confirming the story to DAILY GUIDE, DSP Paul Mensah Bampo, the Darkuman District Police Commander, said the suspects committed the act around 3:30 am on March 8, 2017.

The two victims were walking along the official town road to their house after an all-night service when the incident happened, according to him.

He said the two suspects, who were on a royal motorbike with registration number-16-G-2365, snatched the bag of one of the victims and sped off.

A searched conducted on them revealed a Jack knife and a pair of scissors.

A Bible, two Nokia mobile phones and cash of GH¢7.00 were found in the said bag.

The suspects would soon be arraigned before court.
( [email protected] )
By Linda Tenyah-Ayettey

One Million U.S.-Donated Vaccines Arrive in Ghana
52 minutes ago