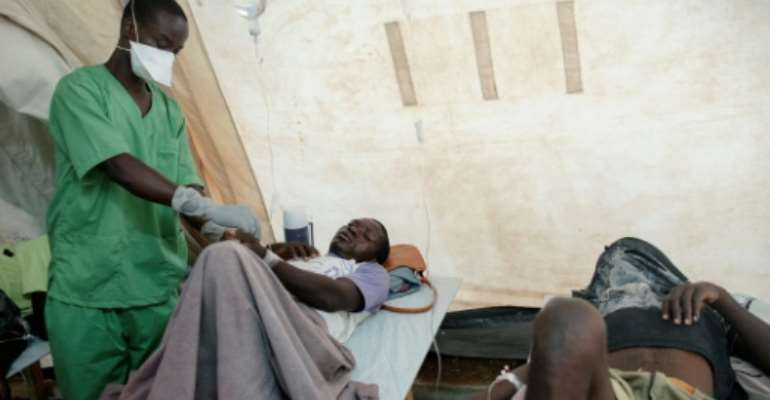 In 2015, 41 people died in one of Mozambique's worst ever cholera outbreaks. By Mauricio FERRETTI (AFP/File)

Maputo (AFP) - Mozambique is battling a cholera outbreak that has infected 1,222 people and killed two, the country's health ministry said Tuesday, warning that it has been unable to slow its spread.

Four of Mozambique's 13 provinces have been affected since the infection spread from the capital Maputo on January 5, deputy director of public health Benigna Matsinhe told a press conference.

It is the third consecutive year that Mozambique has suffered a cholera epidemic with the two fatalities reported to be from the Maputo area.

In 2015, 41 people died in one of the country's worst ever cholera outbreaks.

"We have recorded less cases in recent days, but what worries us is that we have been unable to halt transmission of the illness," Matsinhe said.

Since the end of last week, the infection has spread in Tete province, on Mozambique's western border with Zimbabwe and Malawi, with 397 cases reported.

Cholera typically strikes during Mozambique's rainy season, between October and March, when unhygienic conditions and stagnant water cause the bacteria to flourish.

The infection can cause severe diarrhoea, dehydration and in the worst cases, death.

Mozambique has been been deluged by heavy rains since October following two years of drought.

Malaria cases have also spiked with 1.48 million diagnoses -- an 11 percent jump compared to a year earlier -- and 288 deaths since January 2017.

"We have seen an increase in cases of malaria in recent years explained by progress in our screening programme and in our community treatment projects," said Lorna Gurjal, the head of the health ministry's epidemiology department.

The number of deaths and serious cases are however decreasing, she said.

The Innocent Flower Looking Akufo-Addo Is The Mother Serpent...
19 minutes ago