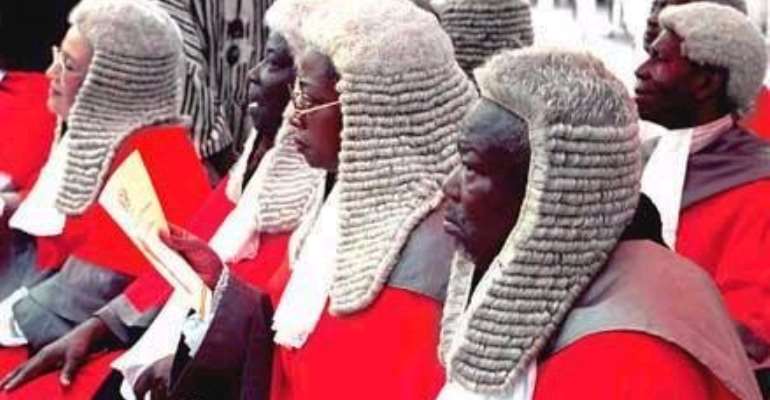 TWO High Court judges and a registrar are to stand trial for allegedly stealing ¢115 million, being interest which accrued on fines paid to the Denu High Court.

This follows findings made by the Disciplinary Committee of the Judicial Council as part of a move to clampdown on corruption within the judiciary.

After a thorough investigation, the committee found that the judges, Mr Justice E. M. Boateng of the Cape Coast High Court and Mr Justice M. K. Woanya, the former High Court judge of Denu but currently on retirement, condoned and connived with the registrar, Mr J. D. Owusu, to steal the money between 2000 and 2002.

They have, accordingly, been charged with conspiracy and stealing and are expected to be arraigned before a High Court soon. The committee's findings and the recommendations have already been forwarded to the Attorney-General's Department.

Mr Justice Boateng was alleged to have initiated the whole deal of sharing the interest with the registrar but he was later transferred to Sefwi Wiawso. However, when Mr Justice Woanya took over at the Denu High Court, he allegedly continued with his predecessor's deals.

In a letter dated April 12, 2005, and addressed to the Chairman of the Judicial Council, Mr Justice Boateng appealed to the council not to prosecute him.

He wrote, “I am on my knees begging the council to revisit my case with a lot more compassion and call off the said prosecution.”

The letter, which was also copied to the Attorney General and Minister of Justice and the Director of Public Prosecutions (DPP), pleaded with the council to rescind its decision, since it would have adverse effects on him and his family.

Mr Justice Boateng admitted in the letter that the registrar of the Denu High Court invested the money paid into the court's account at the bank and it yielded interest of ¢115 million.

“Out of this amount, I took ¢13 million while Justice Woanya took ¢25 million, with the registrar pocketing the rest,” the letter said.

Mr Justice Boateng said following the charges that had been preferred against him and the likelihood that he would be dragged to Accra to face trial anytime from now, he and Justice Woanya met and decided that it would be in their interest to refund the money, since the registrar had failed to contribute towards the refund, although he had the lion's share of ¢77 million.

According to the letter, Justice Boateng agreed to part with his robing and book allowances of ¢45.5 million, while Justice Woanya agreed to pay off the rest.

The letter said Justice Boateng and Justice Woanya had rendered an apology to the owners of the money which was invested and they had accepted it in good faith.

Justice Boateng further stated that he had not been fairly treated in the matter because “in the first place, even though I took ¢13 million, my allowances of more than three times that figure were withheld, while my colleagues were never asked to pay even a pesewa by way of refund”.

To buttress his point, he stated in the letter that Justice Woanya was on retirement, enjoying his benefits, adding that “even if he is convicted and imprisoned, he and his children will not suffer as he has his entitlements to fall on”.

According to him, “the same thing will not apply to me as I stand to lose all my entitlements because I will be dismissed after the trial and my children and I will suffer more hardships”.

He, therefore, called for parity of treatment and urged the council to suspend the prosecution and offer him the chance to resign.