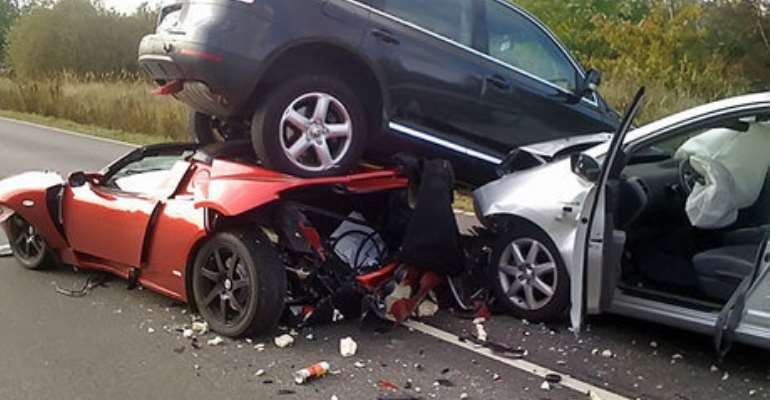 Many of the deaths that occur on our roads that we comfortably refer to as accidents, are actually not accidents but "suicides and murders" occasioned by suicidal drivers and murderous stakeholders who enjoy counting the number of dead people through accidents per year instead of actually doing what will end the carnage.

If an individual commits suicide in his home, he dies alone, but if a driver commits suicide in a public transport bus that carries about a hundred people by intentionally crushing it against other cars, he doesn't die alone. He goes with the other passengers.

You many be surprised that I am referring to them as "suicides and murders" but I have a few reasons to support what I am saying and it follows thus;

Every single Ghanaian will agree with me that the road sector has actors and players we usually refer to as "stakeholders" comprising of various institutions across the public and private sectors whose sole responsibility and mandate is to keep our roads safe.

Some of these "stakeholders" that readily come to mind are the proponents of "service with integrity" - the almighty Ghana Police Service, "the custodians of equality, fairness, equity and rule of law" -the Judiciary and the Attorney General's Department, the various MMDA's, The Akpeteshie Drivers Unions(GPRTU, FLOATING KILLERS AND PROTOA, The rickety car registration mafia union - DVLA and the reactive road death recording agents -National Road Safety Commission, Killer Drivers of Ghana, Government and Voiceless Passengers Association of Ghana.

The above are the so called stakeholders in the road traffic sector who on daily basis are supervising and superintending over the unjustified, unwanted, unnecessary and needless thousands of deaths we record every year on the roads they are supposed to keep safe and secure so that people can always arrive at their various destinations safe and sound.

But no! They are hypocrites operating in a hypocritical society that loves everything except valuable lives.

These so called stakeholders are part of a hypocritical society that doesn't border about a scary staggering annual accident statistics that is eating away precious lives and property running into millions of Cedis.

What kind of wicked society is this? Such a vampire society. A callous society, blood thirty society. That is what we have become. We have become a country that will drive its own people on to the streets through our various omissions, commissions, actions and inactions just to kill them.

Our society has become death and dumb to the extent that reports of deaths through accidents on our roads appear to them as just another piece of "Kweku Ananse story" to them. They don't care, and they don't mind. It is not their business, so long as it is not them or anybody they know.

But this same hypocritical society are the the ones who will complain as if they care when they hear one, two or three disillusioned people have become mentally affected by their individual and social challenges and decide to end it all by intentionally taking their own lives via suicide due to the neglect of the very society that refused to give them a listening ear.

Suicide is bad and nobody should intentionally kill himself despite the challenges society may present. There is always a second chance to change things and turn your life back on track.

But, the truth is that the number deaths that come about as a result of suicides every year, are nowhere near that which occurs through the carnage on our roads. And why is our society not interested in talking about the road rage but enjoy talking about a few suicides?

The hypocritical stakeholders in the hypocritical society are well aware that the first major cause of road accidents in Ghana is poor driving skills but they will never match to the National Road Safety Commission or the Driver and Vehicle Licencing Authority to put pressure on them to ensure that all drivers in the country acquire the needed skills before they can obtain licence to use our roads.

Police officers on the road know that it is against the road traffic regulations for drivers to drive whilst talking on mobile phones but they either see it and gloss over it, or collect a few Cedis into their pockets and allow the drivers to continue on their suicide and if possible, murder mission.

People use unregistered vehicles especially on weekends with the intention that when they get involved in an accident or if you like hit a pedestrian on the road, they can speed away without being identified.

Those murderous stakeholders know that most accidents on our roads are caused by broken down vehicles but yet they will never tow them to safety until lives are lost before they coming running as if they didn't know about it.

A driver who is not on a map suicide mission, will never get onto the road with worn out tires but what do we see; drivers drive recklessly with those tires with careless abandon without any of the stakeholders blinking an eye.

More than half of commercial vehicles in the country are not road worthy but yet, they have road worthy certificates and in situations where they don't have it, they pay a few Cedis to the "tax collectors in police uniform" and continue their "suicide and murder missions" of some cars on our roads also invariably leads to road accidents.

Drivers and their mates engage in Over-loading of vehicles beyond their expected gross weights in order to make profits knowing very well that that can cause accidents and endanger their lives and that of their innocent voiceless passengers.

When they drive these over loaded vehicles on the road, all they need to do is to share the profits with the stakeholders on the road and continue their suicide missions.

Ghanaian drivers think that the more work you do, the more money you will make and so they don't know what is fatigue when they are driving. They want to drive all day for money.

They do not know that fatigue is a major cause of road accidents by long-distance drivers.

There are regulations on drunk driving but the so called stakeholders don't care about its enforcement meanwhile, they tell us that10% of road accidents in country are caused by drunk driving. If this is not murder and suicide mission then what is it?

They tell us that over-speeding is responsible for about 50% of road accidents in Ghana but yet, what do we see on our roads today about drivers driving at jet speeds as if they were on a suicide mission to hell.

We always ask government to improve the conditions of our roads but it does appear that sometimes some of the bad roads are rather life savers and the good roads are always thirsty for the blood and flesh of our people.

When the roads are poor and in bad shape, they kill less than when they are upgraded into first class killing zones.

Most road users show some disregard for traffic laws of the country by doing what pleases them on the road.

Okada riders jump red lights traffic intersections as if they were a special breed of road users who are above the road laws of the country and as hypocritical as we are knowing that this also leads to needless accidents on our roads, we keep quite and watch.

On most of our roads, the markings are either minimal, faded or on-existent and this sometimes makes navigation on the road difficult for drivers.

How can we avoid, minimise or if possible eliminate these needless accidents?

We all have a responsibility to protect each other and be each other's keepers. So let's speak up against the carnage on our roads.

Let's consider the following to protect ourselves once the stakeholders are not ready and willing to effect the necessary changes to protect us;

1. Anytime you find yourself in a car either as a driver or passenger always keep your eyes on the road. Don't text, WhatsApp or google.

When you are driving, you should be doing just that and nothing else.

Avoid driving and changing CD's or tuning into radio.

Avoid drunk driving. Never, ever drink and drive.
Avoid construction areas as much as possible if you can and if there are no alternative routes, please be extra careful andd vigilant.

Follow speed limits and go according to them all the time.

Do not fight or engage in arguments on the road and make sure you ignore aggressive drivers who try to provoke you or insult you.

This is my rage, I hope it helps in eliminating the road rage. I hope the stakeholders will listen and get to work quickly.