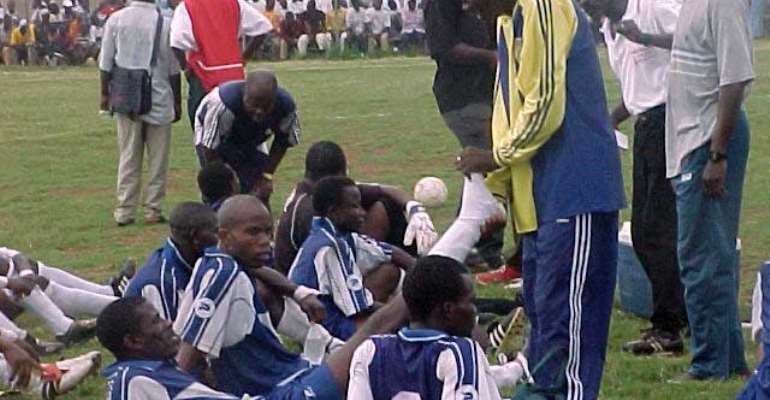 Accra, April 19, GNA - Accra Hearts of Oak and Kumasi Asante Kotoko, the powerhouses of Ghana football tumbled on the opening day of the Ghana Telecom Premier League, losing to unsung clubs. Hearts bowed to promoted Cape Coast Ebusua Dwarfs 2-3 at the Ohene Djan Sports Stadium in Accra while Asante Kotoko were cut down to size by Berekum Arsenals via a 2-1 defeat at Berekum.

Elsewhere, King Faisal maintained their stunning form by beating Bofoakwa 2-0 to climb to the top of the table.

Spearheading the drama in Accra was youthful Ebow Ghansah who sent international goalkeeper Sammy Adjei retrieving the ball twice from his net in the 35th and 44th minutes. Amissah Nsaidoo scored the third goal for Dwarfs, while Anthony Annan and Bernard Don Bortey reduced the tally for Hearts of Oak.

Kotoko went down in the first half, but sent the count to parity when Godfrey Yeboah struck in the 78th minute, but the homers scored again in the 87th minute to hand new coach Malik Jabir his first defeat in as many league games.

Obed Asamoah of Kpando Heart of Lions went into the history books as the scorer of the fastest goal with his 53rd second strike in Tamale against Real Tamale United at the dreaded Kaladan Park. RTU managed to cancel the goal in the 62nd minute to share honours with the sensational Kpando Club who are the sitting Coca Cola Top Four champions. Ashantigold was another home winner on day one, as Shaibu Yakubu's single strike remained the only goal of the match against Liberty Professional at the Len Clay Stadium in Obuasi.

Feyenoord won their match at their adopted Swedru Sports Stadium, baptising promoted Kade Hotspurs into the premiership with a lone goal.

Sekondi Hasaacas who survived the premiership by wining a play off against Mine Stars, the third placed team in the Division One League (DOL) took an early lead against Power F/C but had to end the match with only a point in hand as the Electricity Boys drew level to end the match a goal apiece.

The only barren draw of the opening day was the encounter at the Tema Sports Stadium between homers Real Sportive and Okwaau United.

SRC election: National security intrusion is an attack on ac...
20 minutes ago

Police to meet religious leaders on legal implications of th...
20 minutes ago