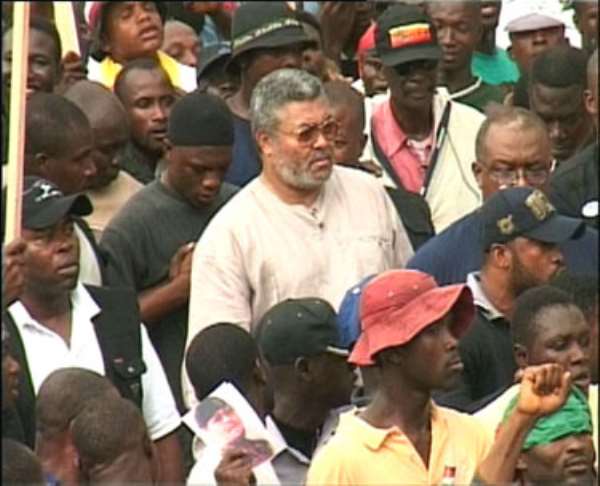 ... political whirlwind as CPP joins PNC in combat ... Ex-PNC candidate defects to NPP as Gen. Botwe hits the ground running Kumasi, April 19, 2005 (Chronicle) -- Former president Jerry John Rawlings, who is also the founder of the main opposition party, the National Democratic Congress (NDC), treks down to the Ashanti regional capital of Kumasi to address a political rally at Asokore Mampong in the Asawase constituency today, Chronicle intelligence has gathered.

Mr. Rawlings, widely acclaimed the most charismatic Ghanaian leader of our time, is to appeal for votes from the electorate.

In accordance with electoral law, the rally today (Tuesday April 19,2005) marks the end of all outdoor political activities towards the bye-election.

Mr. Rawlings' visit aimed at rounding off the electioneering campaign comes at the trail of a similar one by the flag bearer of the party, Professor John Evans Atta Mills last Saturday.

The national Chairman of the NDC, Dr. Obed Yao Asamoah is also expected at the Asokore Mampong rally.

The Chronicle has gathered also that key members of the ruling party would be introduced to the constituents at the rally.

The NDC, in its resolve to annex the Asawase seat, launched “Operation All Out” at the weekend to ensure a sweeping majority of the 80,315 valid votes in the constituency.

The past one month, Kumasi and Asawase, particularly has literally been under siege by top guns from the three contesting parties, namely the NPP, NDC and the PNC in the Asawase bye election on Thursday with the former PNC parliamentary candidate for the constituencty Mr. Atiga publicly renouncing his membnership of the party and campaigning for the NPP which he said is the party which can bring development to the area.

However, PNC has gone on record to say that they have now virtually merged with the CPP, so the CPP has also thrown some men into the fray and working the ground with the PNC as the CPP is not contesting the seat at all.

Almost all members of the National executives, including the general secretary, Mr. Bede Ziedeng and his vice, Baba Jamal, national organizer, Mr. Samuel Ofosu Ampofo and National Youth Organizer, Haruna Iddrisu, have descended on the newly created constituency to ensure a massive win for the NDC.

Also in town to outsmart the strategies of the NDC are former General-Secretary and current Information Minister, Mr. Dan Botwe and Mr. Stephen Ntim, the national first vice chairman of the NPP.

Reliable NPP sources confided in The Chronicle that over a hundred foot soldiers of the party from the national, regional and constituency levels are on the ground to work towards overturning the voting pattern at the constituency.

The parliamentary seat became vacant, following the demise of the late NDC parliamentarian, Dr.Gibril Adamu last February. He had secured 33,000 votes against 29,000 by Mrs. Patricia Appiagyei of the NPP in the December 2004 general elections.