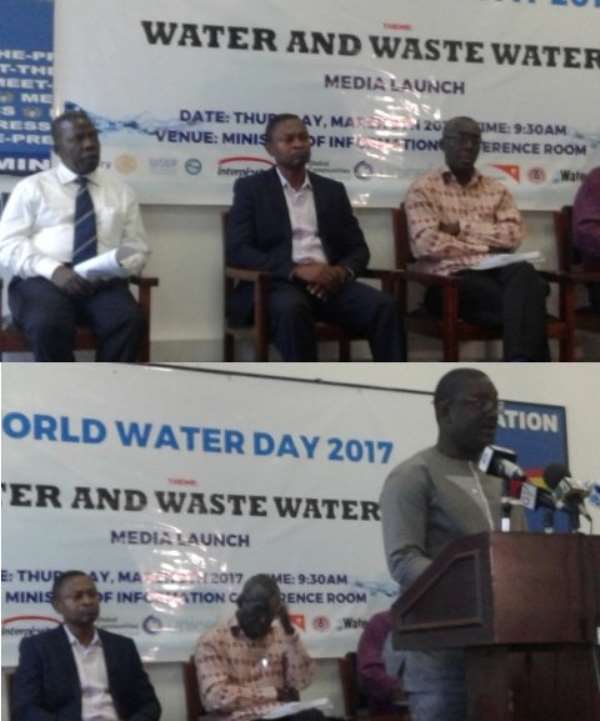 By Godwill Arthur-Mensah, GNA
Accra, March 9, GNA - The Ghana Water Company Limited (GWCL) says less than 10 percent of wastewater in the country is treated and therefore called for measures in prioritising its recycling to enhance socio-economic development.

Mrs Margaret Macauley, the Chief Manager of the Water Quality Assurance Department (WQAD) of the GWCL, made the call at the media launch of this year's World Water Day, in Accra, on Thursday, on the theme: ''Water and Waste Water''.

She said the opportunities for exploiting wastewater as a resource were enormous because safely managed, wastewater could serve as an affordable and sustainable source of water, energy, nutrients and other recoverable materials.

She said as a nation, we must ensure systematic reduction in the proportion of untreated wastewater and substantially increase recycling and safe re-use of both liquid and solid waste.

According to her, a large proportion of wastewater generated was discharged directly into the environment without or with very little treatment because the metropolitan, municipal and district assemblies that were responsible for waste management lacked the capacity to manage them effectively.

She said pragmatic steps must be taken to improve the sources of water by reducing pollution, eliminate dumping of liquid and solid waste as well as minimise the release of hazardous chemicals and materials into water bodies.

The Chief Manager of the WQAD of the GWCL noted that most of the wastewater treatment plants were dysfunctional and therefore partially treated wastewater were discharged back to the environment which could negatively affect the ecosystem and pose a health risk to the surrounding communities.

She said: ''Water has to be carefully managed throughout the various paths of the water cycle from fresh water abstraction, pre-treatment, treatment, distribution, use, collection of grey water, post-treatment, re-use of the treated wastewater, and its ultimate return to the environment, ready to be abstracted to start the cycle again.

Mrs Macauley observed that water was essential to human existence and core to sustainable development, and also played a critical role to the wellbeing and prosperity of the people.

She said the United Nations General Assembly in 2010 explicitly recognised universal access to water as a human right and considered it as one of the most important issues of the 21st century.

She noted that water was needed for domestic, commercial and industrial purposes and, therefore, called for concerted efforts by all stakeholders to maintain its wholesomeness and availability.

The Executive Secretary of Water Resources Commission, Mr Benjamin Ampomah, who chaired the function, reiterated the need for concerted efforts by all stakeholders to tackle the menace of illegal mining which had polluted major water bodies across the country.

He said water was a valuable resource that played an essential role in human survival therefore the issue of illegal mining should be tackled with all seriousness and perpetrators made to face the full rigours of the law.

The World Water Day is celebrated by the international community on the 22nd of March each year, to draw attention to the importance of freshwater and advocate the sustainable management of freshwater resources.

This year's theme: Water and Waste Water,'' provides an important opportunity for all stakeholders to learn more about how wastewater can be a valuable resource to the country's economy and how its safe management would aid in investment as well as the health of the populace and the ecosystem.

The celebration would be climaxed on March 22 with tour of some water recycled plants by various stakeholders.

A change in our constitution will lead to the new Ghana we'r...
45 minutes ago

We've lost a courageous woman, a goal-getter and valued comr...
48 minutes ago