The Role Of Men 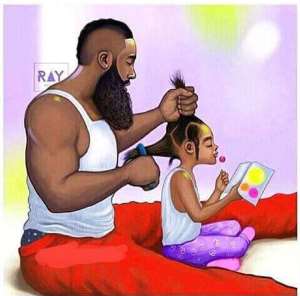 Nature has stripped off the very dictates of who a man is. By default he is taught to be a living robot without any scintilla of evincing his engrossed delicate emotions else he'd be tagged a 'weakling' thus being disrespected within his own inner circles. A man by this status quo is expected to be a distinct stripe of a human being with a heart made of steel. He is not supposed to feel pain or dare to express it.

For this literary apologia, a man has to squirrel away his emotions ; the very thing that makes him a human being. By this precept, over the period has enslaved a man in the belligerence of his own banality completely ignorant of showcasing care, emotion and love when it matters in a desperate exasperating attempt to look tough and brave.

Relying solely on this dogma of creation, where it was almost arm-twisting for man(Adam) to live alone or be left to the mercy of loneliness, a woman (Eve) had to be introduced to balance his equation of loneliness which goes to confirm that indeed the heart of a man is not that made of steel but a living flesh capable of possessing and expressing emotions just like women.

The love a father confabulates on a child is directly proportionate to that of a mother. The focus of awkward quandary has always been how to demonstrate it giving the precept I hinted earlier for fear of being tagged a weakling. I've witnessed a dire distressing condition of a child with a fever that had a father moved to tears for the reason that his child; a baby is ill and its crying restlessly made him shower rain tears trying to feel the pain of the baby so he yells out to the nurses and doctors to attend to his baby. Trying so desperately to console his child who neither hears him nor discerns him, yet he speaks in consoling words to the baby as if it hears .

It is not also so strange to see a man down to his knees appealing for the forgiveness or the love of woman. Is a man made of steel and has he the heart of steel? Glaringly the answer is a No! . The value of a father should never be underestimated or downplayed as he plays an equally important role in the multiplication of humanity at large and so deserves an equal recognition of a celebration of a sort on an international front like 'International men's day'.

The very import of this piece is not to compete nor compare men to women but to sincerely recognise the role of the man. In all genuineness some men have been both the father and mother to many children in the absence of the mother (death) or gross irresponsibility. Children have oft grown up to behold the sight of a man in grey hair who was also their mother. But for some strange reason this type of selflessness is often swept under to carpet as it makes no news.

The irresponsibility and the Carlos nature of some men shouldn't make us lose sight of the good majority let alone fail to celebrate them and their role. If not for the stern personalities some father's exude, the moral upright doctrine of our youth today would have been lost to the wind. It's so lame and puerile thinking to say men don't care or men should openly display emotions if this is accentuated, it only goes to stimulate stinginess in men in the display of their emotions.

My name is Abdul Rafiq and I belive in the equal rights of all.