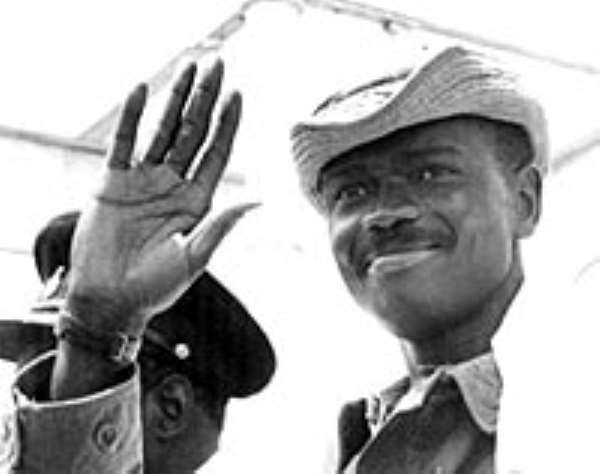 Saga of a human rights abuse perpetrator turned victim In a curious twist of fate, the Ashanti-Mampong born Major A. A. Afrifa, a man who personally supervised some of the most heinous human rights abuses captured by the National Reconciliation Commission (NRC) report, himself became a victim of human rights violation.

Interestingly, the three-month old Armed Forces Revolutionary Council (AFRC) junta, which violated his human rights by executing him without trial and burying him in an unmarked grave, was led by a man who once claimed that Afrifa was his hero; former President Jerry John Rawlings.

But whilst his execution as an MP-elect by the Rawlings and Major (Rtd) Kojo Boakye Djan-led AFRC has won him sympathies over the years, the Executive Summary of the NRC report made one of the most damning findings ever recorded against a senior officer of the Ghana Armed Forces, against him.

The man revered by some Danquah-Busiasts and loathed by many Nkrumaists, personally supervised the extra-judicial killings of a number of military personnel and civilians, including a 17-year old boy, the NRC report noted. Present with him at some of the extra judicial killings were the late Col. E. K. Kotoka and former Police Commissioner J. W. K. Harlley.

The damning findings by the NRC, which suggest that state-sponsored extra judicial killings in Ghana begun with Afrifa, Kotoka and their colleagues, are contained in several pages on the nation's first military junta, the National Liberation Council (NLC), led by Afrifa and some of his colleagues.

According to the NRC, worse victims of human rights abuses in the NLC regime were particularly members of Nkrumah's security apparatus in the Presidential Detail Department (PDD), who offered some resistance to the overthrow of the Nkrumah government.

“Members of the Presidential Detail Department (PDD) became targets of human rights abuse by the security forces. Some were lined up and executed after they had surrendered to the attacking forces, and others were detained under the Protective Custody Decree”

The PDD members, who were in Dr Nkrumah's entourage on his trip to Hanoi, Vietnam, went with him to Conakry, Guinea, and stayed in exile with him. One of them, Boye Moses, who later returned to Ghana was paraded through the streets of Accra in an iron cage on his way to detention at Usher Fort Prison”, noted the NRC in its Executive Summary on the issue.

Writing further, the NRC, noted that soldiers broke into the Flagstaff House during the attempt to overthrow Nkrumah, took the men away, forced the women and children at gun point to leave their homes and shot dead some of the males, including a 17-year-old George Bartels.”

Others, the report said “were subjected to various forms of cruelty and molestation. They were beaten, made to crawl on their knees and to lie on the ground facing the scorching sun.”

What the NRC obviously found disturbing was that some of these incidents took place in the presence of the leading architects of the coup, particularly Kotoka, Harlley and Afrifa.

This is how The NRC captured part of the story: “Although the overthrow of the Nkrumah government was generally welcomed as rescuing the nation from a suffocating dictatorship, it brought in its train significant human rights abuses. In the course of overthrowing the government, grave human rights violations were committed by the coup-makers, led by Col E K Kotoka, Commissioner of Police JWK Harlley and Maj. A. A. Afrifa, especially against members of Nkrumah's security apparatus in the Presidential detail Department (PDD), who had offered some resistance. The insurgent soldiers surrounded the block of flats, took the men such as Ernest Kojo Nyan away, forced women such as Ekuba Eduku and children, at gun point, to leave their homes. Some of these women's husbands had accompanied the President on his trip to Hanoi. The soldiers also shot dead some of the males including boys, e.g. George Bartels then 17 years old. Others were subjected to various forms of cruelty and molestation. They were beaten, made to crawl on their knees and to lie on the ground facing the scorching sun. Some claimed that hot tea were poured into their eyes. These incidents took place even though Kotoka, Harlley and Afrifa, leading architects of the coup, were present at Flagstaff House and the Headquarters where the prisoners were congregated” Curiously, after criticising Nkrumah's obnoxious Preventive Detention Act and citing it as one of the reasons for his overthrow, the coup makers, according to the NRC report, also “passed the Protective Custody Decree 1966 (NLCD 2) under which all Ministers, Parliamentarians, regional and district Commissioners and senior functionaries of the CPP were detained without trial.

The NLC also passed a decree banning CPP officials and functionaries from holding public office and from being voted into public office for 10 years.”

“Vaccines As A Tool For Immigration Control Is Retrogressive...
43 minutes ago