80% of pupils have no school uniforms 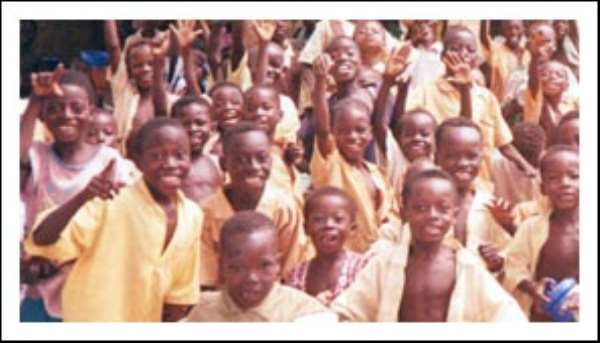 Daboase (W/R), April 16, GNA - Eighty percent of pupils in some villages and towns in the Mpohor Wassa East District of the Western region lacks basic school uniform, textbooks, chalk, pencils and pens. Mrs Rebecca Dadzie, District Education Director, told the Ghana News Agency (GNA) in interview after interacting with a three-man delegation from the Copenhagen Teachers Union That, "most of them dress shabbily with tattered cloths, without sandals and looked malnourished."

The communities include Kwafokrum, Apraponsu, Bomba and other villages and towns.

The teachers are Mrs Ulla-Britt Sabroe, Mr Birger Madsen and Ms Cathrine Madsen who are in the country at the invitation of Nana Ekua Bri II, Chief of Apraponso and a member of the Copenhagen City Council. Mrs Dadzie said abject poverty, lack of appreciation for education, irresponsibility of some parents and other social challenges have contributed to such depressing state of affairs.

She said the district is one of the most deprived in the country, but unfortunately it has been neglected for long.

The Mpohor Wassa East also lacks required qualified teachers and as a result the district has engaged non-professional teachers to make up for the shortfall.

Speaking to the Danish delegation, Mrs Dadzie said the district has established Parent Teacher Associations (PTA) and School management Committees (SMC) as a platform for interaction with traditional rulers, civil society groups, opinion leaders and the public to ensure that the problems are reduced.

Mrs Dadzie advised parents in the district to stop withdrawing their wards from school every farming season to engage them on their farms.

She said while this habit was widespread in most parts of the region, the situation in the district is particularly serious resulting in poor academic performances.

She said while the educational authorities are not against children helping their parents on their farms, care must be taken to ensure that this is not done at the expense of the children's education. The Danish delegation also called on the District Chief Executive, Mr Edward Tawaih Amprofi and presented him with a gift from the Mayor of Education of Copenhagen City, Mr Per Breent Gaard.