Ghanaians at risk? Studies show a link between cancer and herbicide use in agriculture 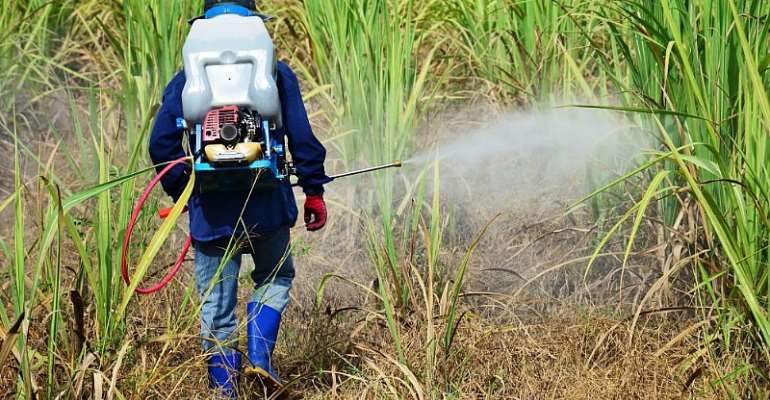 In a 2015 monograph issued by the International Agency for Research on Cancer (IARC), a body of the World health Organization, the former concluded on basis of scientific evidence, that “Glyphosate is probably carcinogenic to humans.” This means that this popular organophosphate compound, which is found in most agro-chemicals including the popular local brand Edwuma Wura, causes cancer. Glyphosate is the most widely used herbicide globally, with a production of 620,000 tons in 2008, according to paper published in Elsevier journal by Norwegian researchers, Bohn et al. (2014). In 2015, Sri Lanka followed El Salvador’s 2013 decision to ban Glyphosate after scientific studies showed that it (glyphosate) was the cause of increased incidence of Chronic Kidney Disease (CKD) which inflicted 15% of the working population in the northern part of the country.

The human health and environmental impact of Glyphosate has been a subject of intense controversy within the international scientific community. For instance the European Food Safety Authority (EFSA) strongly contested the conclusions of IARC on grounds that the data was inconclusive. Recent studies in 2015 by Robin Mesnage (a molecular biologist and geneticist at King’s College London) and his colleagues, concluded that “chronic exposure to a Glyphosate-based Herbicides (GBH) in an established laboratory animal toxicity model system at an ultra-low, environmental dose can result in liver and kidney damage with potential significant health implications for animal and human populations.” Other researchers, employing different investigative methods have reached similar conclusions (e.g. see Olorunsogo, Bababunmi & Bassir, 1979; Larsen, Najle, Lifschitz & Virkel, 2012).

In a snap-check survey conducted by Rural Heights Foundation, agro-chemical dealers were selected randomly from Pinanko in Gomoa West, Kantamanto in Accra and Swedru in Agona, to screen their inventory mix for Glyphosate. All retailers reviewed sold some brand of herbicide with Glyphosate compound. There is additional observational data from Pinanko, Darumpong and Osedze in the Gomoa West district to suggest the popular use of Sunphosate and Nwura Wura (all containing Glyphosate), during land clearance and preparation stages of the production phase. According some farmers spoken to by Rural Heights Foundation, the weedicide is a “life-saver” because labor cost for land clearance could amount to GH¢100 per pole (acre). This cost is prohibitive to many smallholder farmers compared to the shelf price of a powerful weedicide such as Glyphosate that may cost as low as [...] Click to download full brief here.

Why is this Issue Important?
On January 10, 2017 [...] policy implications, key recommendations and source citations, download full brief for FREE.

Do you seek a CSR partner that shares your interest and passion for social impact, speak to us about possible areas for collaboration or support. [email protected]