Mining Contributed Over ¢1bn to Economy 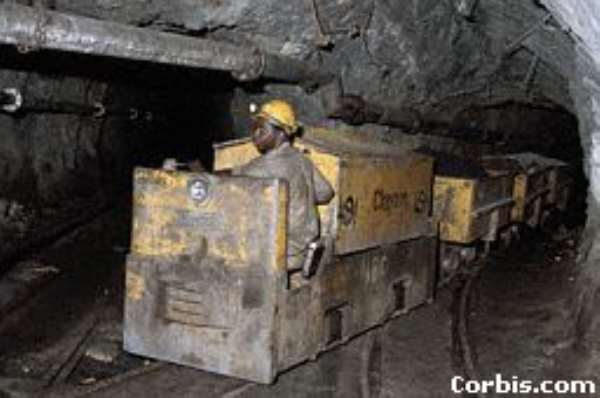 The chief executive of the Ghana Chamber of Mines, Ms. Joyce R. Aryee has said the mining sector contributed over one billion dollars to the economy of Ghana last year.

Giving the breakdown, she said $787,491,515 accrued to the country within the period under review as mineral export revenue.

The mining companies, who are members of the chamber, as their tax liabilities, also paid ¢450,432,561,000 to the Internal Revenue Service.

The figure, she continued, represented about 9.03% of the total collection of the IRS last fiscal year.

Speaking at the presentation of the community assistance budget by the Ghana Manganese Company (GMC) to communities in its catchment area at Nsuta last Saturday, Ms. Aryee said apart from all these laudable contributions, the mining companies who constituted the chamber also spent over ¢124 billion in 2003 to finance community-assisted projects like schools, water and the payment of their utilities.

The chief executive further told the large gathering that included the minister of Forestry, Lands and Mines, Prof. Dominic Fobih that the figures she had quoted were clear manifestations that the mining sector of the economy had become the springboard for the development of this country and must therefore be supported.

She admitted that mining in Ghana had its negative side but said the positive side far outweighed the negative side and called on the public to support the sector to grow.

The administrative manager of the GMC, Mr. Rexford Agyemang also told the gathering which was also used to honor the managing director of the company, Jurgen Eijgendaal as development chief for the Esuaso divisional area that, GMC had a vibrant education policy to support students from the various communities in the form of bursaries.

According to him, last year, the company set aside over ¢200 million to support 391 students from their catchment area to pursue their education. He promised that the budget allocation for the bursaries would go up by 25% this year.

The company, with the support of CBUD, had also initiated an alternative livelihood programme for all the communities in the Esuaso divisional area.

Finance for this project is being provided by the GMC. Mr. Jurgen Eijgendaal, the managing director of the GMC, who now goes by the name Nana Kweku Tieku II, following his successful enstoolment as the development chief of the area, hinted that this fiscal year, his company had set aside ¢1billion to support infrastructural development of the area.

Nana Kodwo Anomako III, the Esuaso divisional chief traced the history of the manganese extraction in the area and said their decision to honour Mr. Eijgendaal as Nkosuosohene (development chief) was based on his support for the development of the area.

Present at the well-attended ceremony were the deputy western regional minister, Madam Sophia Honer-Sam and the DCE for Wassa west, Emmanuel Kwesi Ayensu among others.