Ghana, Brazil urged to build on their goodwill 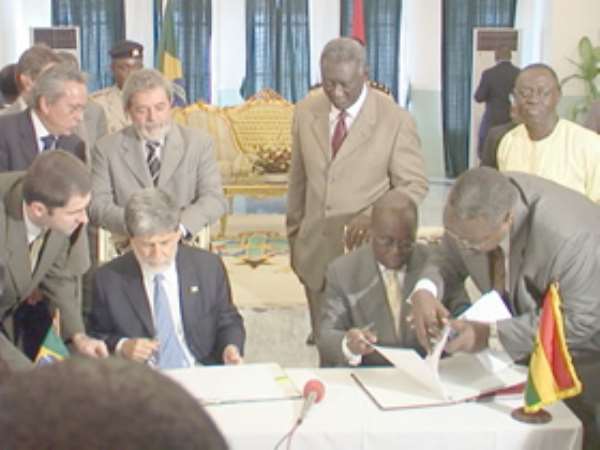 Accra, April 13, GNA - President John Agyekum Kufuor on Wednesday stressed the need for Ghana and Brazil to build on the goodwill of the historical and cultural relationship between them on a very beneficial economic relationship for their mutual benefit.
He said the goodwill between Ghana and Brazil was still ongoing and had developed from political diplomacy to economic diplomacy. President Kufuor made the call at the joint inauguration of the Ghana-Brazil Chamber of Commerce and Industry by him and the Brazilian President Luiz Inacio Lula da Silva in Accra.
He said the speedy implementation of the decision taken at the second session of the reactivated Ghana-Brazil Permanent Joint Commission for Cooperation held in Brasilia in August last year to establish the Chamber underscored the commitment of the business communities of the two countries to strengthen business ties between them.
"This endeavour is a manifestation of the attraction of the Ghanaian business landscape to the Brazilian business community and the reciprocal desire of the Ghanaian business community to do business with Brazil," he said.
President Kufuor said the Government's policy on the Golden Age of Business was not a mere slogan, but a well focused strategy with clear achievable objectives.
He said the Government had consistently pursued a private sector-led economic strategy, which had created new business-related institutions, introduced generous investment incentives and ensured a politically stable and business friendly environment to enable private enterprise in Ghana to flourish.
"I am optimistic that the members of the Chamber will collaborate to boost trade and investment between Ghana and Brazil to enable us to achieve higher levels than are currently the case. It is my conviction that in the coming years we shall be able to boast of greater volumes of balanced trade between our two countries," he said.
President Da Silva said Ghana imported 174 million dollars worth of goods from Brazil in 2004 adding that she was the fourth largest importer in Africa after Nigeria, South Africa and Angola.
He said the Tema Port occupied a strategic point for products from Brazil to the West African Sub-Region, handling about 80 per cent of Brazilian goods.
President Da Silva said the signing of the MOU on bilateral air service agreement would further boost the economic relations between both countries through more added value, increase in volume and diversification of products from each other country.
He called for the establishment of joint ventures and more Brazilian investments in Ghana in the health, education and road sectors.
President Da Silva said a major challenge facing the Chamber would be the challenge to discover the potentials of both countries and utilising them for their mutual benefit.
"We have to work hard and work more for Ghana to develop itself in a more sustainable manner to create wealth for the people."
Mr Abam Quartey, President of the Ghana Chamber of Commerce and Industry, who chaired the function, said the inauguration was in fulfilment of the desire of participants in a Trade Fair held in Brazil in 1977.
He said both countries shared a lot in common, such as climate and natural resources and could, therefore, achieve much from the Ghana-Brazil Chamber of Commerce and Industry to create wealth for the people to reduce poverty.
Mr Quartey stressed the need to nurture the Chamber to blossom and to be used as the vehicle to promote trade and industry between both countries.

How long can you thrive on tribal politics? — IB asks Mahama
22 minutes ago