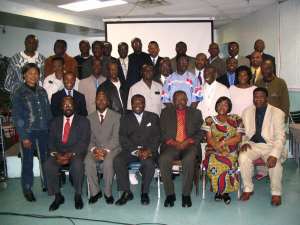 The Chapters of the New Patriotic Party (NPP) in Canada's two largest cities, Montreal and Toronto held a Strategic Planning Congress in Toronto on Saturday April 9, 2005. The Congress which was the first step towards the holding of a Canada-wide Congress later this year was under the theme “Collaboration for Positive Change Chapter Two and Beyond”. Delegates discussed strategies for readying the Party for the 2008 Elections and beyond as well as effective ways of harnessing the potentials and resources of Ghanaians in the Diaspora towards the development of Ghana.

In a powerful keynote address to the Congress punctuated frequently by deafening applause and standing ovations from the delegates, Ghana's High Commissioner to Canada and former National Chairman of the Party, His Excellency Samuel Odoi Sykes enumerated the positive achievements of the NPP administration in Ghana over the past four years. “It cannot be gainsaid that President Kufour's administration has managed the economy quite creditably. International confidence in the economy is growing which is manifested by the new business interests in the country”, he said.

Taking a swipe at the NDC's economic record, the High Commissioner pointed out that “by the law of averages, the economic performance of the Kufour administration in his first four years far outstrip whatever was done in the 20 years of Rawlings' revolutionary era”. Turning to what he termed the vulgar behavior of former President Rawlings, His Excellency Odoi Sykes warned Jerry Rawlings to learn to put up behaviors that are expected of a normal former Head of State.

Organizing to go on peaceful demonstration to protest, he said, is the normal constitutional right of every citizen and group but these have to be done in peaceful ways without resorting to spitting out “venom, falsehoods and vulgarisms against a sitting President. There is a whole world of difference between free speech and irresponsible diatribe being exhibited by Jerry Rawlings”. The High Commissioner urged President Kufour “to choose the path of prudence and ignore this extraordinary crudity from a typical source”. In his welcome address to the Delegates, Toronto Chapter Chairman Mr. MacDonald Agbenyo expressed his delight that the dream of establishing a Canada-wide Congress of the Party was now bearing fruits. He entreated delegates to work hard to realize the noble objectives that have been set to design effective strategies to assist the Party at home to chalk more electoral victories as well as assisting in the rebuilding of Ghana.

Montreal Chapter Chairman Mr. Hans Duah challenged the delegates as well as all members of the Party both at home and abroad to “keep up the fight to keep Ghana's destiny in good and capable hands”, the good hands and stewardship of the NPP. He noted that “the NPP is the only political party that can stabilize and guide Ghana on a proper path to growth and prosperity”. Mr. Duah warned that everyone who loved Ghana has a responsibility to ensure that the country is not plunged again into another dark period controlled by blood-thirsty lunatics who will terrorize the nation and its people. And in a very serious tone he warned that many Ghanaians in the Diaspora will have to say goodbye to Mother Ghana if these blood-thirsty lunatics ever lay their hands on power again in the land of our birth. This sentiment was re-echoed by other delegates throughout the day's deliberations.

In the final communique issued at the end of the Congress, the Montreal and Toronto NPP Chapters noted that the responsibility of building Ghana and sustaining its growth lay first and foremost with Ghanaian citizens. They therefore called on President Kufour and the NPP government to tap into the resources of overseas-resident Ghanaians many of whom are waiting for the right signals from the government before investing in the country. They therefore proposed the establishment of a Diaspora Ghanaians Direct Investment Fund into which overseas-resident Ghanaians will be encouraged to invest. This, they believe, will generate more investment revenues than counting on the investment from foreigners which always come with heavy price tags. To this end the Congress suggested the setting up of a Secretariat in Ghana to be responsible for Ghanaians in the Diaspora.

Delegates noted with regret that the tax burden in Ghana is shouldered by only about 15 per cent of the Ghanaian population leading to the over-reliance of the government on Customs revenues which places further hardships on the few citizens and persons who do businesses through the ports. They therefore called for the widening of the tax net in Ghana noting that there are many economic and finance experts among overseas-resident Ghanaians who are prepared to assist the government set up the necessary tools and programs for tax collection in Ghana.

Noting the frustrations that have been expressed by many Ghanaians in the home constituencies of many Congress delegates, the Congress called on Members of Parliament and Ministers to have constant interaction with their constituents to listen to their problems instead of showing up only at election times. Two panel discussions took place in the afternoon session of the Congress. Steve Tachie, a Social Worker led a discussion on the problems faced by street children in Ghana. He warned that the problem is growing and immediate steps need to be taken to stem that tide. Mr. Tachie called for effective collaboration between government and NGOs already on the ground to design programs to assist these children get training in productive ventures. Another panelist Mr. Christian Akyeampon, a Pharmaceutical Management Consultant did a power-point presentation on Bureaucracy and Our Concept of Productivity. He enumerated the bottlenecks in our bureaucracy that stifle initiatives and productivity in Ghana. He called for the easing or removal of these bottlenecks.

Financial Planner/Economist, Ken Ntiamoah presented an analysis of the successes and failures of the NPP in the last elections. He expressed grave concerns about the spate of dismissals of party members in Ghana as punishment for various party wrongdoing. Ntiamoah however suggested that more effective counseling and conflict resolution mechanisms need to be designed to deal with problems that are naturally bound to crop up in the party as any human organization. Statistically, he said, dismissing a whooping 20 members from one constituencyy alone amounts to losing 250 members and if this is replicated in at least ten constituencies, that spells a lot of trouble for the party in numerical terms.

Social Worker/Journalist, Michael Baffoe, Secretary of the Montreal Chapter did a presentation on Winning Strategies for Elections 2008 and beyond. Mr. Baffoe called for a re-appraisal of the campaign strategies of the Party with more grassroots and rural campaigning instead of the large-scale urban rallies and official durbars the party has used in the previous elections.

The Congress which was judged as a resounding success closed with a Diner /Dance at the Al-Curuba Banquet Hall from 9.00 P.M till 2.00 A.M. In attendance at the Congress as well as the evening event was Ghana's Consul General in Toronto, Mr. John Boahene