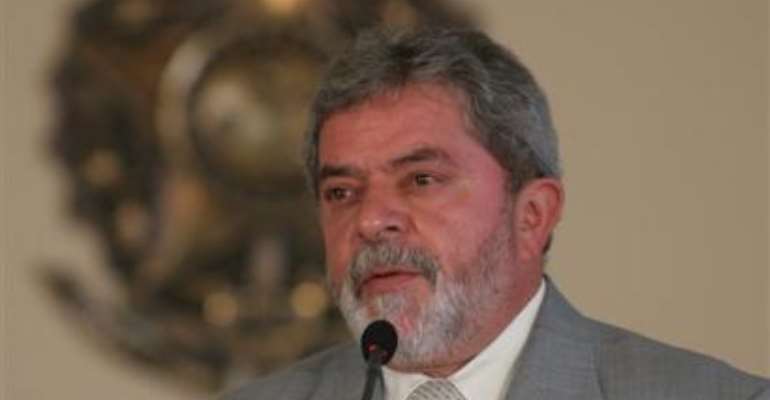 Accra, April 12, GNA - Scores of African/Brazilians in Ghana, the Tabon Community on Tuesday honoured President Luis Inacio 'Lula' da Silva of Brazil who is on a two-day official visit to the country with 'kente', a traditional royal cloth and a pair of sandals.

The presentation, which was done at a mini-durbar organised in honour of the President, also offered the Tabon Community the opportunity to fraternise with President Da Silva.

Recounting the history of the Tabon Community, Nii Azumah V, Tabon Mantse (Chief) said over 170 years ago freed slaves from Brazil landed on the shores of Africa.

He said the slaves came along with vast experiences, and over the years had exhibited those qualities in their daily vocation in Ghana. Nii Azumah commended the Brazilian Government for rehabilitating the "Brazilian House" at James Town, Accra, which is to serve as a documentation centre to provide information on the Tabon Community. Acknowledging the honour, President Da Silva commended the Community for upholding the dignity and integrity of Brazil in Ghana as well as maintaining a link with their original roots.

A number of his Ministers, including those of Foreign Affairs; Education; Health; Culture and Promotion of Racial Equality and top Business Executives accompanied President Du Silva to the durbar. Nana Addo Dankwa Akufo-Addo, Minister of Foreign Affairs, Mr Jake Obetsebi Lamptey Minister of Tourism and Modernisation of the Capital City also attended the durbar.

President Da Silva arrived in Ghana on Tuesday at the head of a 35-Member Delegation for a two-day visit to boost ties between Ghana and his country. The visit forms part of a four-nation West African tour. 12 April 05