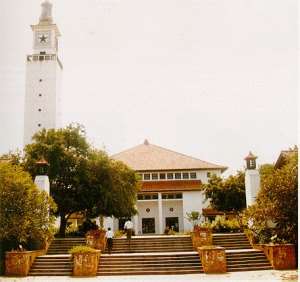 Students of the Mensah Sarbah Hall, Annex B, one of the Universities of Ghana, were put into a state of panic on the dawn of Friday when unidentified gunmen invaded the hall, firing indiscriminately. The gunmen entered the reading room and fired, scaring students who were studying.

The incident began when some students of the hall attempted to find out why a female colleague had been held in a strange car on campus for close to four hours. No arrest have been made, but the Airport police have invited Miss Deladem Deku and a man who was later identified as Nana Osei to help the police in their investigations but Nana Osei failed to honour the invitation.

Miss Deladem Deku, 22, a level 300 sociology student had been picked around 6pm on Thursday by the said Nana Osei. According to eyewitnesses, the car, a Benz convertible with registration number GR 3845 W, came back to campus around 10pm but parked in front of the hall with its windows, but without any traces of the lady. When around 1:45 am on Friday the car was still parked there with the lady apparently locked inside, her colleagues became worried and decided to find out why.

Some of the male students used blocks to block the car while they ascertained the whereabouts of their colleagues. Moments after, the two other vehicles, an Audi with registration number GW 1 U and a Toyota Lexus with registration number GT 72 S, arrived and parked near the first vehicle. The occupants got out and started shooting, sending the students running helter skelter. In the melee, the occupants of the Benz car took out Deladem and sent her to her room apparently to avoid her being noticed. Eyewitnesses believed the action was to conceal the identity of the lady, Nana Osei and the shooting gang.

According to the eyewitnesses, one of the students mustered courage, sneaked out of the hall and reported the incident to the Legon police. Graphic investigations have revealed that Nana Osei, who was also having a pistol in the car, first attempted to “show the boys where power lies” but was prevented by Deladem who snatched the gun from him.

Investigations also showed that it was when Deladem seized the gun from Nana Osei that he decided to call for a “re-inforcement”.

It was also learnt that Deladem is a non-accredited resident (a percher) in the hall. When hall president (landlord), Solomon Halim, was contacted for his side of the story, he ordered his colleagues on the second floor, Room 212, to “drive the reporter away,” saying that the incident was an “in-house one”.