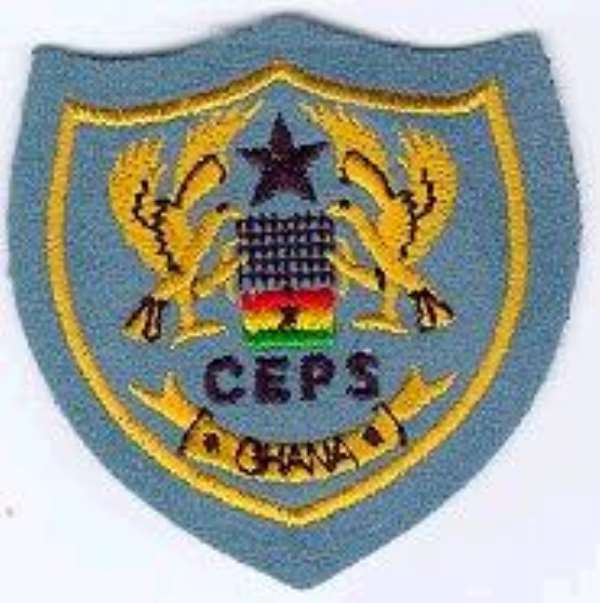 A top Customs, Excise and Preventive officer in the Ashanti Region J. C. A. Class One, Frank Mamphey, has been implicated in a theft of a Toyota Land Cruiser with registration number GR 8000 U, valued at ¢650million belonging to African Gold Ghana Limited, a Konongo-based mining company.

Narrating the case to the Amasaman District Magistrate's Court presided over by Mrs. P. N. A. Mills, the Prosecutor, Chief Inspector Tottimeh, told the court that in December last year, when African Gold Ghana limited, closed for the Christmas holidays, the management contracted the Kruger Brent Security Company to provide security at all premises of the company.

Eric Appiah Kubi, the first accused, was subsequently detailed to guard the company's Tesano office as a day security man.

On 26th December 2004, Eric, on realizing that the only caretaker, Emmanuel Asare had left the office, deserted his post and allegedly bolted with the Toyota Land Cruiser. He then went into hiding until he was arrested from his hideout at Agbobloshie on 21st January 2005. Upon interrogation by the police, Eric admitted the offence and mentioned the other conspirators, including Mamphey of CEPS.

In his statement to the Tesano Police, Eric alleged that Joseph Bediako, a friend and the second accused, once visited him while he was on duty and on seeing several cars parked, suggested that he, with the assistance of another man could help him sell one of the cars.

The two, allegedly informed Mamphey who came to Accra and gave them money to buy a new number plate to be fixed on the car before driving it away from the Tesano head office of the company.

Eric alleged that, the two then drove the car to the residence of the customs officer at APC at Abeka, where the seat covers were replaced with new ones. The CEPS Officer then allegedly instructed the other suspects to send the car to Kumasi without using the Accra-Kumasi main road.

Eric alleged that after the Christmas holidays, Mamphey returned to Kumasi and sought the assistance of one Nana Yaw Opoku (a.k.a Wofa Yaw of Kumasi) - of the Koforidua number one branch of the GPRTU to find a buyer for the car. Nana Opoku then took a 100 million cedis loan from a chief residing at Achimota and allegedly gave it to Mamphey and Bediako.

On receiving the money, Mamphey allegedly drove the car to the Kumasi Technical Institute where he changed the colour. He allegedly gave ¢20million to Eric Appiah Kubi, the first accused, whilst the rest was shared between Bediako, the second accused, and himself.

In a telephone interview with Public Agenda last Friday, Nana Yaw Opoku, confirmed that he was the one who gave the 100 million cedis loan to Mamphey after the latter asked for the money to help a friend prepare duty on a car he imported from Togo. Nana Opoku said he in turn, collected the money from a friend, who is a popular traditional chief and pointed out that it was never true that the chief bought the car. When pressed to disclose the name of this chief, he was adamant.

When Public Agenda tried to contact Mamphey last Friday afternoon, his mobile telephone (0244 270900) was switched off, while a lady secretary at his office in Kumasi, who confirmed that he was really an officer, declined to make further comments.

Meanwhile, one of the complainants, Bediako in his last appearance at the court complained bitterly why, Mamphey was not put on remand.

A family member of Bediako after the court proceedings disclosed to Public Agenda that some 'big men' from CEPS were working behind the scenes to make Mamphey escape the law.

Public Agenda can confirm that the case will be heard again today, Monday April 11 at the Amasaman District Magistrate Court.