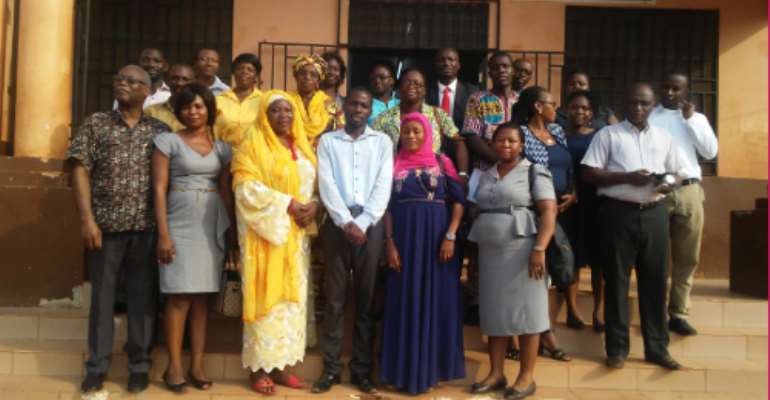 VOiCE in collaboration with Alliance waste has launched a waste and mentoring program in the public basic schools within the Ayawaso sub-metro aimed at soliciting the support and participation of heads of the various schools during the project.

The programme brought together the Director of Education Accra Metro, heads of schools, the circuit supervisors, within the Ayawaso sub – metro.

The President of VOiCE, Mr. Ahmed Mustapha Yaajalaal indicated that the project is established as a result of a research the organization undertook on “Education Infrastructure Challenges in East and North Ayawaso Sub – metro” jointly produced with its partners such as Millennium Cities Initiative from the Earth Institute, University of Columbia, New York in 2015.

He added that in the survey, findings were made on 23 public schools which included 17 primary and 14 junior high schools.

According to the findings, the enrolment of boys and girls has increased significantly but the issue of waste management and mentorship programs were urgently needed in the schools in order to shape the children in choosing their future careers.

Mr. Jacob Nii Mingle, Head of Corporate Communications of Alliance Waste admonished the school heads to inculcate the spirit of discipline on how to manage and dispose waste in their students and also teach them proper hygiene.

He pledged his outfit’s support in collaborating with VOiCE to bringing to an end the menace of filth in their respective schools.

Mr. Rabiwu Kuta, a Management Member of VOiCE threw more light on the mentorship program and urged the school heads present to take advantage of it and enrol their pupil/students.

He expressed worry that an area like Ayawaso which is embedded with lots of potentials cannot boast of equal growth and development.

“It is so because the raw potentials have not been inspired and motivated enough to step up to the level of excellence and success, hoping with this new initiative of VOiCE, area of mentorship will be given great priority,” he stated.

Mr. Kuta reiterated that the success of a great society lingers round true natives becoming key shareholders of the growth and development of their society.

He entreated the school heads present to support this new mentoring programme as part of the school curricular because true education does not consist merely in the acquisition of few facts of science, history, literature or arts but the development of character.

The representative from the National Commission on Civic Education (NCCE), Mr. Adams Sidik pledged the commission’s support to VOiCE and Alliance waste in educating the children on their civic responsibility as well as reduce the sanitation menace in the communities.

The special guest for the program, the Metropolitan Director of education, Mr. Kwesi Hutchful congratulated VOiCE on their success chalked so far and urged the organization to intensify its sensitization programs and also extend it to other communities.

He pledged his support as the Metro Director for education to get the schools within Ayawaso involved in all programs initiated by VOiCE.

One of the Circuit Supervisors, Mrs. Gifty Tagoe (CS-NIMA), bemoaned the difficulties the schools within her jurisdiction go through in carting away the garbage from the schools.

She also complained about the huge sums of money they pay to the waste management companies before the rubbish are collected.

Mrs. Tagoe appealed to Alliance waste to come to their aid in order to improve the situation in the community.

Give EC Benefit Of Doubt On 24-hour Results Promise – CDD-Gh...
9 minutes ago