Making Ghana @60 Relevant To Our Needs 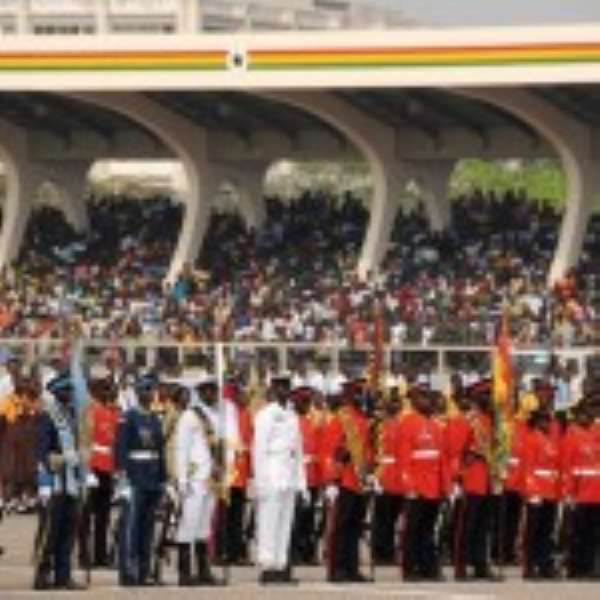 Barely one month from now, Ghana, our beloved country, will be sixty years old as an independent nation. The Government of Addo Dankwa Akufo-Addo has already set up a 30-man committee to prepare the grounds for a grand celebration.

Many Ghanaians have called for a low-key celebration, following allegations that the Ghana @50 celebration left quite a bit of hole in the financial standing of this country, and that a number of items ordered were late in arriving.

The Chronicle urges the Ken Amankwaa Committee to take cognisance of these sentiments and plan a commemoration that would do justice to our reputation as the first nation in Africa to throw off the colonial yoke, while having one eye on the need to avoid extravaganza.

Ghana @60 is a significant milestone in this nation's political emancipation. What it means is that the entity Ghana and its people should reflect maturity in all their endeavours. It should translate into the awareness that state resources need to be protected and used judiciously. The business as usual approach to the governance process must give way to a sober reflection that state assets are meant to facilitate the governance process, and help to improve the quality of lives of those who sweat to produce those resources.

It is a shame that 60 years after throwing off the colonial yoke, promising to use state resources to improve the lives of the people, this country has allowed people who have found themselves in positions of influence, to misappropriate these resources and left the people in a desperate state of want.

As we prepare to let our hairs down in commemoration of the momentous events of March 6, 1957, let us imbibe the culture of inclusiveness. We must be prepared to appreciate the contribution of all founding fathers. It is unfortunate, but it is beginning to look like any government in power, at any point in time, tries to play up the contributions of those who helped to establish that particular political edifice, as against those from their political rivals.

The Chronicle is looking forward to a national celebration, and not the projection of the Elephant Family, now that the New Patriotic Party is in power. On such auspicious occasions, let us play up the contributions of all those who ensured that the colonial entity called the Gold Coast finally became the independent State of Ghana.

From the contributions of John Mensah Sarbah, Joseph Wilson Sey (alias Kwaa Bonyi) and others in the Aborigines Rights Protection Society, through Paa Grant, Dr. Joseph Boakye Danquah, Dr. Kwame Nkrumah in the formation of the United Gold Coast Convention, the very first political party to emerge in the then Gold Coast to the Convention People's Party, which eventually brought about independence, the contributions have been far and varied.

We would like to believe that those who have played various roles in the post independent era to sell Brand Ghana at home and abroad, would all be recognised and applauded. From the pioneering role of Mr. Quayson Sackey, the Ghanaian who became the first African President of the United Nations General Assembly, to the exploits of Busumuru Kofi Annan, the first Black African to become Secretary General of the United Nation,s as well as those who blazed the trail in other fields, would be celebrated.

The Chronicle agonizses over the fact that the curriculum in our basic and second cycle institutions no more feature civics, the fore-runner to political science, which opens up our children to become patriotic citizens early in life.

We do not believe jumbling a number of subjects together under social studies has done much to imbibe the spirit of nationalism in our children. We would like to believe that the time has come for a national stake-holders' forum on education to re-orient our children.

While we consider the 'Sankofa' approach to our historical evolution, The Chronicle urges those planning Ghana @60 celebration to play up the education aspect of the commemoration. Our kids ought to know where we came from, and where we are going!

Akufo-Addo Has Turned Ghana Into 'Hell-Hole Instead Of Parad...
50 minutes ago