By The Guardian (Charlotte Moore in Accra) 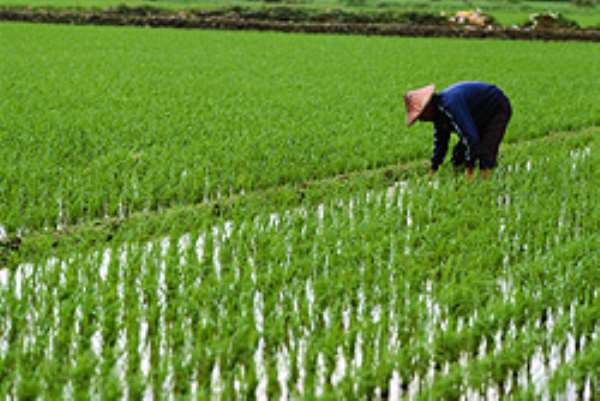 Rachia Salifu finds the rice-growing season the most difficult time of year. During the day she works the fields with her baby on her back in temperatures that can reach 43C. In the evening there is not enough food for her five children so she listens to them cry with hunger, unable to help. Ms Salifu farms rice on one acre in the dusty village of Nyarigu near the northern border of Ghana and her story is typical of local rice farmers. Over the past three decades, Ghana's rice industry has collapsed. Farmers struggle to make a living and unemployed villagers flock to the cities.

Oxfam today highlights the plight of rice farmers in Ghana in the latest salvo of the Make Poverty History campaign. "The plight of rice farmers in Ghana shows how western policies and unfair agricultural subsidises in the US and the EU are destroying the livelihoods of farmers in developing nations," said Harriet Binet, a spokeswoman for Oxfam. In the early 1980s conditions attached to loans given to Ghana by the IMF and the World Bank resulted in the country liberalising its markets and cheap imported rice flooding the market. The IMF and World Bank now admit that such conditions do not help the world's poor but reversing the damage of such policies is difficult.

The World Bank continues to support a policy of lifting subsidies but this has to be done by the west as well as developing nations. The bank condemns the heavy subsidises given by the EU and US to their farmers.

Between them, the US, Japan and the EU subsidised their rice production by $16bn (£8.48bn) in 2002, the latest year for which full data are available. The US policy is particularly harmful for the rice-growers of Ghana. In 2003, the US paid $1.3bn in rice subsidises to its farmers and sold the crop for $1.7bn, effectively footing the bill for 72% of the crop.

Most of these subsidies go to big Arkansas rice farms. One company alone, Ricelands of Arkansas, was the recipient of US agricultural subsidies totalling $490m between 1995 and 2003.

In Accra's bustling market the effect of US imported rice is easy to see. Huge billboard ads for Chicago Star Rice stare down on hawkers.

Bags of imported rice reach to the ceiling of Charles Yeboah's long, narrow shop. He does not stock Ghanaian rice. "I can't sell it. The quality of the imported rice is so much better that even though it costs more, people buy it," he says.

He also says that Ghanaian rice is only available for six months of the year. The poor quality of Ghanaian rice is no secret. Lack of government subsidies mean the farmers cannot afford to invest in any machinery to help with harvesting the rice. "We do not have a combine harvester. It is all done by hand," Ms Salifu said.

Neither does the village have a mill. Sometimes the farmers lay the rice out on the road and let the cars run over the crop to separate the husk from the grain. Or they beat the crop in the fields with heavy sticks. Either way, the crop ends up broken and with stones in it.

Oxfam has set up a project near Nyarigu that it hopes will help resolve the local problems of milling rice. In a dark concrete room sits a small blue milling machine that cost £1,500. It has yet to be connected to the electricity but has been tested and produces clean, white rice of similar quality to the imported rice.

Many people come to Accra looking for work as the dwindling rice crop has resulted in high unemployment in the north. In the middle of a windy roundabout, a stone's throw from the market, a group of women and children have made the hard concrete their home. Fusheina Alhassan says the women try to sleep in the nearby railway station.

"But if it rains we cannot sleep. Often the men come and steal our clothes and money while we sleep. Sometimes they rape us," she says.

Up in Nyarigu, Ms Salifu says government subsidies would help the farmers to pay for plots, chemicals and water which would allow them to grow more rice for their families and to sell on the market, thus enabling the women to come back to jobs in the north.

But Mats Karlsson, the World Bank's country director in Ghana, says the government is better off spending its limited resources on improving Ghana's infrastructure. "If we could reduce the cost of transport, we would increase the earnings of farmers by much more than any internal policy could achieve," he said.

"Let us be clear. The biggest problem facing farmers in the developing world are the subsidies the west provides to its own farmers. These are deeply unfair," he added.

Oxfam agrees. "If the west is truly serious about making poverty history, then agricultural subsidises must be abolished," said Ms Binet.