Shaibu tops all in One Touch Gala 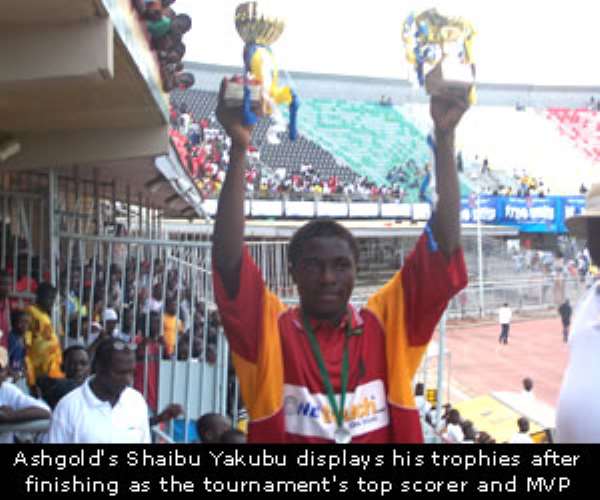 Accra, April 10, GNA - Shaibu Yakubu, AshantiGold's sensational striker swept all the awards at the end of the two day Gala Competition for Premier league clubs at the Ohene Djan Sports Stadium in Accra on Sunday.

Yakubu, an instrumental figure in the progress of the Club in the competition emerged as the over-all best player and the top scorer for the tournament.

He scored in their opening match against King Faisal and scored one each against Real Tamale United (RTU) and Liberty Professionals in the quarter and semi finals respectively to push his team to the finals of the competition that saw them battling it out with Kumasi Asante Kotoko for the ultimate trophy.

This is the second time that Yakubu is winning the top scorer award on the local scene after winning the same award in the 2003 Premier league.

Yakubu was presented with two trophies and four million cedis for the two awards.

The youngster said in an interview with the GNA Sports that he would step up his training in order to repeat the same performance in the 2005 Premiership and expressed the hope that the optimism that his Club would be able to annex the league trophy, which has eluded them for the past years.

Referee Ebenezer Ferguson was adjudged the "Best Referee" of the tournament.

Ferguson officiated in the final match between Kumasi Asante Kotoko and AshantiGold that was won by Kotoko through the penalty shoot out after both sides failed to score in regulation time. Referee Ferguson was also presented with a trophy and two million cedis for his prize.