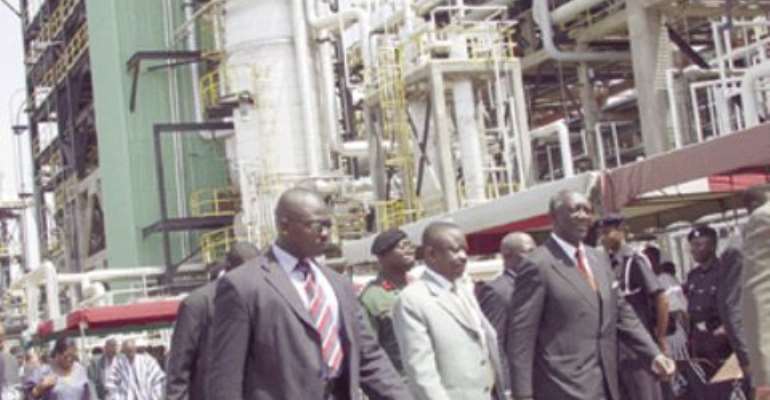 Tema, April 9, GNA - The Tema Oil Refinery (TOR) is to start full operation with its Crude Distillation Unit (CDU) on Sunday after two weeks of closure due to the effect of the Good Friday Fire disaster at the PSC Tema Shipyard.

This followed the near completion of repair works on the oil pipeline that was damaged by the fire while a water line has also been constructed to tap fresh water to cool the CDU.

Consequently, 30,000 tonnes of gas oil had arrived at the oil berth on board the vessel "Ocean Liberty" to augment the current fuel stock. During the closure of the CDU, the Residual Fluid Catalytic Cracking Unit (RFCC) was being used.

Initially, TOR was using seawater from the water-pumping house at the PSC Shipyard to cool the CDU but since it got damaged in the fire there was the need to resort to fresh water.

Dr Kofi Kodua Sarpong, Managing Director of the TOR, flanked by his management staff told newsmen at a briefing on Friday after leading them to inspect all the equipment put in place.

He said 90 percent of the work had been done and minor work was still ongoing for operation to start on Sunday for the Refinery to be in the position to produce some premium, gas oil and diesel. With this achievement TOR has carried out the repairs ahead of the three-week period it targeted, he stated, and gave the assurance that supply of fuel products would not be interrupted.

The Managing Director said the management had been holding crisis meeting to consider what should be done to pumping-house, which was used to tap sea water to cool the CDU.

He said the cost of damage could be recovered because there was adequate insurance cover and the Insurers had come to assess the damage and had started the process for claims.

Dr Sarpong expressed gratitude to both senior and junior staff of TOR for working around the clock to bring the situation to normalcy as well as the contractors who swiftly identified the problems. As the way forward the Managing Director said operations would be normal for TOR to be a vibrant organisation saying that more lessons have been learnt from the disaster and we will build on it. The Good Friday fire outbreak burnt the TOR's oil pipe line and pumping house, VALCO's conveyor belt, the MV Polaris, the Togolese registered vessel which was under maintenance from which sparks came into contact with oil on the surface of the water to cause the fire as well as some fishing companies nearby.

Seventeen workers working on the vessel lost their lives while two survived. They were Mr Stephen Quansah and Mr James Kemavor. Following the disaster the government set up a seven-member committee with Nana Owusu Nsiah the immediate past Inspect General of Police as the Chairman.

The incident attracted many personalities including President John Agyekum Kufuor, Ministers of State, related stakeholders and individuals to the scene.

The government had given the assurance to give fitting burial to those who perished in the fire.

Meanwhile, the Managing Director of the PSC Tema Shipyard is reported to have sneaked out of the country.

The disaster was the third since the 1980's. The first was the MV "Ama Della" which capsized and killed about 24 people when it was being commissioned and the second was in 2000 when nearly 20 crewmembers lost their lives in a fishing expedition.