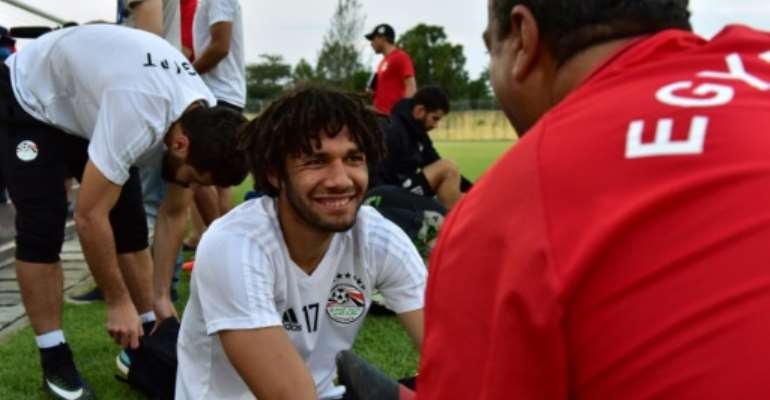 Egypt's players attend a training session in Libreville on February 4, 2017, on the eve of the 2017 Africa Cup of Nations final against Cameroon. By ISSOUF SANOGO (AFP)

Libreville (AFP) - Traditional continental giants who had fallen on hard times, Egypt and Cameroon are looking to cap remarkable revivals when they meet in the Africa Cup of Nations final on Sunday.

The first winners of the trophy 60 years ago, Egypt have been African champions a record seven times but were making their comeback in the competition here after missing the last three editions of the Cup of Nations amid political upheaval in the country.

Behind them Cameroon are, alongside Ghana, the next most successful side in the history of the tournament with four victories, the last in 2002.

While Egypt were seen as dark horses on their return to the Cup of Nations for the first time since their run of three straight triumphs in 2006, 2008 and 2010, Cameroon were dismissed as outsiders.

Apparently handicapped by the refusal of several leading players to accept call-ups from Belgian coach Hugo Broos, instead a team lacking in stars has eliminated hosts Gabon and fancied duo Senegal and Ghana to make it this far. 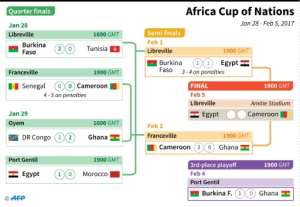 Sunday's match at the 40,000-seat Stade de l'Amitie in Gabon's capital Libreville kicks off at 1900 GMT and will be preceded by a closing ceremony, which begins around an hour and a half earlier.

It will be the third meeting of the countries in the final -- Egypt won on penalties in Cairo in 1986 and triumphed 1-0 in Accra in 2008.

That was Cameroon's last final appearance, but while then they had the likes of Samuel Eto'o and Rigobert Song, their current team has no such big name stars.

"For these young players -- 14 of the 23 are playing at their first Cup of Nations -- it is possibly a unique opportunity in their careers to win the trophy," Broos said.

Speaking to reporters on Saturday, captain Benjamin Moukandjo added: "Of course when you get to this stage you want to win but I think looking at the run we have had we have already done well.

"I don't think anyone here would have bet a cent on us beforehand and that's a real shame for them."

Egypt have been solid and unspectacular on their run to the final, the only goal they have conceded coming in the semi-final against Burkina Faso. 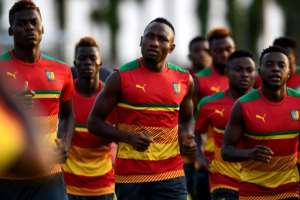 Cameroon's players run during a training session in Libreville on February 4, 2017, on the eve of the 2017 Africa Cup of Nations final against Egypt

After drawing that match 1-1, they went through on penalties, 44-year-old goalkeeper Essam El Hadary saving two spot-kicks to take the Pharaohs through and keep alive his dream of winning the title for the fifth time in a remarkable career.

Like Broos with Cameroon, Hector Cuper has done a fine job in reviving the fortunes of the Egyptians, whose squad contains only four survivors from their 2010 triumph in El Hadary, Ahmed Fathy, Mohamed Abdel-Shafi and Hull City wing-back Ahmed Elmohamady.

"Egypt will not be very different to what we have seen so far, whether people like that or not, whether that means we will be attacking or not," Cuper said on Saturday.

Cuper's own career has featured numerous disappointments in finals, most notably in successive seasons in the UEFA Champions League with Valencia in 2000 and 2001.

The Argentine did not take kindly on Saturday to a question about the number of finals he had been in and lost, but he can take some comfort from Egypt's own record in finals -- they have won seven of eight in the Cup of Nations.

The injuries have been piling up for them, however, and there is a doubt surrounding the participation of centre-back Ahmed Hegazy. Strikers Ahmed Hassan and Marwan Mohsen are out and Mohamed Elneny of Arsenal has had a calf problem.

"We will wait until the last moment to see how the players are feeling. They are very tired, but a final is different to other games and there are a huge number of factors in play," added Cuper.

On Saturday, Burkina Faso secured the consolation prize of third place after beating Ghana 1-0 in Port-Gentil thanks to a late Alain Traore free-kick.