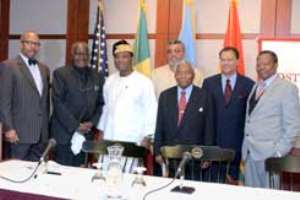 African former heads of state start conference in Johannesburg, will conclude in Boston

They are being joined by African and U.S. business, academic and government leaders for three days of discussions on issues impacting United States-African relations. Participants fly to the U.S. next week to conclude the conference at Boston University.

The Roundtable is hosted by Botswana's former President Ketumile Masire, who is the current Balfour African President-in-Residence at Boston University, and APARC Director Charles Stith, a former U.S. ambassador to Tanzania.

Talks will range from evaluating the recent report by the Commission for Africa, established by U.K. Prime Minister Tony Blair, on enhancing African economic development, to how negative perceptions of Africa in the media may be counteracted.

“This is an opportunity for these former heads of state, each with tremendous stature in their respective country, to engage key private- and public-sector leaders on subjects of importance to Africa,” said Stith. “They are creatively and constructively engaged outside of office, in much the same way Jimmy Carter and Bill Clinton and other U.S. presidents have used their stature to continue to affect policies around the world.”

APARC was established to complement Boston University's African Studies program — one of America's oldest, established in 1953 — as a resource for fostering democratization and free-market reform in Africa. In addition to hosting African former heads of state, it also serves as a repository for the documents of democratically elected African leaders, and organizes lecture series, academic conferences, and a visiting professors program.

Boston University is the fourth-largest independent university in the United States, with an enrollment of more than 29,000 students in its 17 schools and colleges. Over five decades, BU has established an international reputation for excellence in teaching and conducting research on Africa, and has built and maintained broad collaborations with institutions in Africa.

For more on the Boston University's APARC, see http://www.bu.edu/aparc