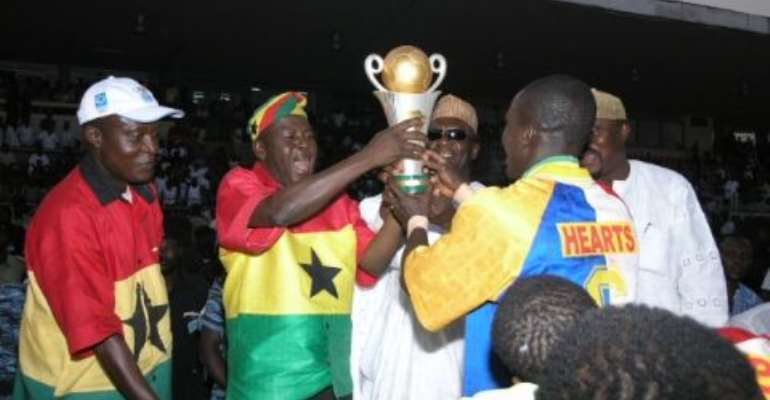 Accra, April 8, GNA - The Ministry of Education and Sports has approved an undisclosed amount as compensation to Accra Hearts of Oak and Kumasi Asante Kotoko for the abrupt postponement of the finals of the 2004 Confederation Cup between the two clubs.

This comes almost four months after the two-leg finals at the Accra and Kumasi Sports Stadia on January 2 and 9, respectively.

Mr Osei Bonsu Amoah, Deputy Minister of Education and Sports announced this in Accra on the final day of the two-day Ghana Football Association (GFA) Congress on Thursday.

He, however, failed to mention the amount and attempt by the GNA Sports to get the figures from the clubs also failed.

The Minister assured the clubs that they would soon move to the bank to cash their monies after it has gone the necessary process. Mr Amoah said the approval is to fulfil the promise made by government to compensate the clubs after the cancellation of the maiden competition.

Although the figures are apparently unknown, football sources told the GNA Sports that it falls below the budget presented by both clubs to the ministry and they are likely to object it.

The GFA in conjunction with the Confederation of Africa Football (CAF) postponed the final matches, which, were, then close to the country's general elections citing security reasons.

The two clubs demanded that they be compensated on grounds that they had spent money in preparing the teams for original date. Hearts won the cup on penalties after a 2-2 aggregate score line.