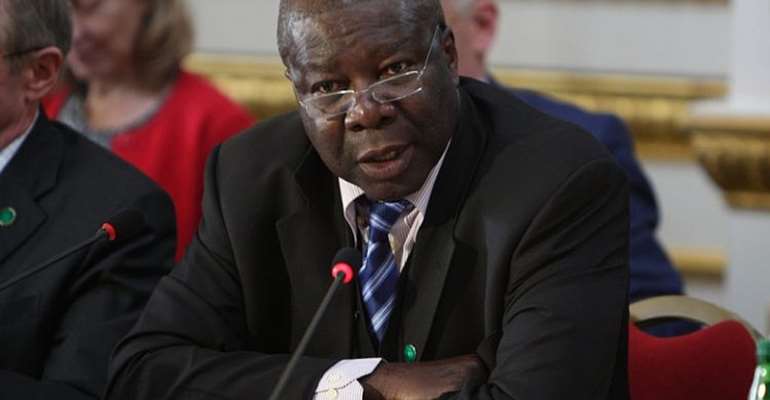 The Ghanaian delegation attending the 28th Africa Union Summit in the Ethiopian capital, Addis Ababa is hoping to grab one of the vacant top positions in the Africa Union (AU) Commission.

On the list of persons vying for the Deputy Chairperson position of the AU Commission position is Ambassador Thomas Kwesi Quartey, former Deputy Minister of Foreign Affairs, who was one-time Executive Secretary to former President John Dramani Mahama.

President Akufu-Addo has submitted his name for consideration for the top job, and government is hopeful he would become the next Deputy Chairperson after the elections today.

The government is counting on his strong credentials in the contest.

The continental body, made up of 54 member countries, is also expected to elect a new AU Commission chairperson to replace outgoing leader, Dr Nkosazana Dlamini-Zuma, who is not seeking a second term after finishing her four-year tenure.

Heads of states and dignitaries have been arriving in the Ethiopian capital, Addis Ababa, where the AU is based, to attend the continental summit and to lobby for their preferred candidates for Africa’s top jobs.

Five candidates intend to replace Dlamini-Zuma, a former South African Minister and first female AU leader, who is planning to take over from  her former husband, President Jacob Zuma, as South Africa’s fourth democratically elected president since the end of apartheid in 1994.

Contestants
Al Jazeera reports that Amina Mohamed, Kenya’s Foreign Minister, is widely seen as a front-runner for the job.

Amina has the backing of almost all Anglophone countries.

Amina, who served as UNEP’s Deputy Executive Director, is renowned for her critique of the International Criminal Court (ICC).

Since her appointment as Kenya’s top diplomat in 2013, Amina has continually criticised the Hague-based court over its handling of African cases, especially those involving sitting heads of state.

Her anti-ICC stance has won her many admirers.
She successfully campaigned to get the ICC to drop its cases against Kenya’s President Uhuru Kenyatta, and his deputy, William Ruto.

Many people have argued that she would obtain for better trade agreements with the rest of the world for Africa.

Bathily is seen by many analysts as a strong candidate for the AU chair seat.

He served as a UN mediator in the Central African Republic and Burundi.

Bathily has strong support from Morocco which could complicate his bid.

Morocco, the only country on the continent that is not part of the AU, withdrew from the union in 1984 to protest against the admission of disputed Western Sahara territories.

Ghana would also prefer to see someone else other than Bathily as AU Chair.

Accra is campaigning for its former Deputy Foreign Minister Thomas Kwesi Quartey to get the deputy chair position.

Quartey cannot obtain the position if Bathily becomes the chair because AU protocol forbids two candidates from the same region from holding the two most senior posts of the organisation at the same time.

Another headache for Bathily’s bid is that Nigeria – the continent’s biggest economy and most populous country, is seeking the position of Peace and Security Commissioner, which Abuja will not get due to protocol if Bathily gets the AU Chair post.

Algeria, Morocco’s rival, would rather have anyone at the AU’s top position except Rabat’s man.

But Senegal can still count on the support of many fellow Francophone countries.

Mahamat is another candidate who could snatched the seat from the favourites, Amina and Bathily.

The 56-year-old and father of five is not new to the workings of the AU, having served as the chair of the AU’s Economic, Social and Cultural Council previously.

Before taking up his current post, Mahamat was his country’s prime minister.

His boss, Chadian President Idriss Deby, who has ruled the country since 1990, is the current chairperson of the AU.

As the AU chair, Deby, who is not in the good books of rights groups for alleged repression of critics, wields enormous power within the organisation.

The candidacy of two Francophones – Chadian and Senegalese – for the top seats will also not help Faki or Bathily, as it could potentially lead to a split in Francophone countries’ votes.

A veteran politician from Botswana and a close ally of President Seretse Khama, Venson-Moitoi, is also vying for the post, although reports say she has a slim chance of winning.

Venson-Moitoi, 65, is the current foreign minister of the diamond-producing southern African country.

The former journalist-turned-politician has served in her country’s cabinet since 2001.

Mokuy has a slim chance of becoming the chairperson of AU, according to reports.

Before landing his current post, Mokuy, 51, served as a senior adviser to President Teodoro Obiang.

Mokuy’s boss, President Obiang, has ruled the former Spanish colony for the past 37 years and is the continent’s longest serving president.