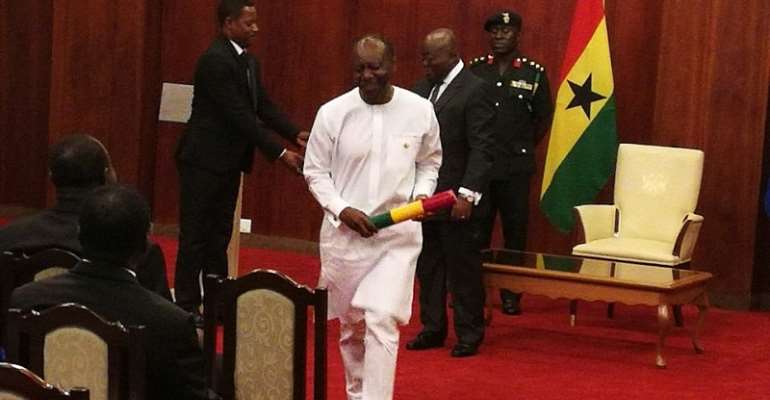 President Nana Akufo-Addo has sworn in 12 of the 36 persons he named as ministers for various portfolios after their approval by Parliament's Appointments Committee.

The swearing-in ceremony took place at the Flagstaff House today [Friday] evening, where President Akufo-Addo charged the new ministers to deliver on the commitments the New Patriotic Party made on the campaign trail ahead of its election victory.

He also impressed on the new ministers not to fail Ghanaians who, he said, expected the government to protect the public purse and ensure value for money.

The 12 ministers sworn in were among the first batch of 13 out of 36 nominees, who appeared before Parliament's Appointments Committee between January 20 and January 24 to be vetted.

The Minister-designate for Foreign Affairs, Shirley Ayorkor Botchway, is part of the 13 approved by Parliament but is currently in Addis Ababa, Ethiopia, and will be sworn in at the Ghana embassy in the Ethiopian capital tomorrow [Saturday], according to President Akufo-Addo, as he visits that country.

The Minority Leader, Haruna Iddrisu, had explained that, his side needed some “additional information” on statements Osafo Maafo and Boakye Agyarko both made before the Committee during the vetting.

He said Mr. Agyarko provided some “inaccurate” information relating to the “debt associated with the Electricity Company of Ghana (ECG) and the Volta River Authority (VRA).”

But Citi News' Duke Mensah Opoku reported that Mr. Agyarko subsequently withdrew some of his comments, prompting the committee to approve him by consensus.

He added that Mr. Osafo-Maafo, however, stood by his comments but provided additional information to support his claim and was therefore recommended for approval by consensus.

They were eventually approved around 7: 30 pm on Friday evening.