UKGCC To Double Trade Between Ghana, UK In 4 Years 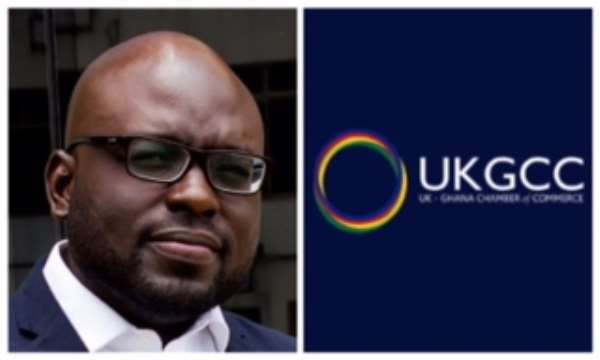 The newly set up UK-Ghana Chamber of Commerce (UKGCC) is poised to double trade volumes and value between Ghana and the UK in the next four years.

Trade volumes between Ghana and UK is currently estimated at just about 3.5 per cent of Ghana's total international trade, and it is valued at about a billion dollars per annum.

But UKGCC CEO, Tony Burkson said given the rich history between Ghana and the UK, that figure is way too small, so the goal of the Chamber is to double it in the next four years.

UKGCC is one of many chambers set up in 40 selected countries as part of the British government's new policy to boost trade between the UK and those countries.

Ghana was one of three countries selected in Africa under this drive. The two other African countries were Kenya and South Africa.

Tony Burkson said the selection of Ghana among just three African countries is a clear indication of how seriously the British government takes its relationship with Ghana.

He said the Chamber is being heavily supported by the British government through DFID and DIT (Department of International Trade), adding that further to that support, former British Premier David Cameron appointed British MP Adam Afriyie as a Special Trade Envoy to Ghana to facilitate regular trade missions between the two countries.

UKGCC is therefore a private sector setup designed to actualize the policy and ensure the trade missions allows for companies to meet potential partners and new clients across both countries.

Currently the main areas of trade between Ghana and the UK are Petroleum Oils, Crude, Cocoa, Cars, Pharmaceuticals, Manufacturing and Engineering equipment, but Burkson thinks the service sector is one area Ghana could use British expertise to develop rapidly.

Indeed, the UKGCC and its partners are organizing their maiden Ghana-focused technology conference in London next month, to promote Ghana's entire technology ecosystem to British investors.

Burkson also noted that Ghana has a vibrant agricultural sector that needs a little help to increase value addition, adding the UK has the manufacturing expertise that can help more Ghanaian farmers go into value addition and thereby increase the value of Ghana's food exports.

"For example Blueskies, a member of the UKGCC, exports chopped and packed fruit from Ghana to the UK, earning Ghana substantial foreign exchange - but more of such stories can be created in Ghana with the help of British expertise," he said.

The UKGCC CEO noted that Ghana's insurance sector is another untapped market, with less than five per cent of Ghanaians insured, but UK insurance firms like Prudential Insurance and BIMA have entered the market recently to seek strategic partnerships to boost insurance cover for Ghanaians.

Burkson also believes that developing a BPO hub in Ghana should be top on the to-do list of the new Ghana government, because British companies could provide Ghana with a lots of back office customer service jobs provided government creates the enabling environment.

"For example is it really necessary for foreign companies to invest US$250,00 before they can set up companies in Ghana - will a policy like this drive more businesses to come here?" the UKGCC CEO asked.

Burkson is confident that Brexit makes the UKGCC mission very interesting, because in the post-Brexit era, "we are already seeing a lot of interest from British firms looking to business in Ghana and West Africa in general."

He however emphasized need for Ghana government to institute investor friendly polices, saying that "this has a potential of making Ghana an investment hub in West Africa, where international companies will set up their headquarters as they trade with the rest of Africa."

UKGCC currently has close to 35 members and is receiving applications on a daily basis from Ghanaian and British companies who realize the value it brings to the table when it comes to driving trade between both countries.