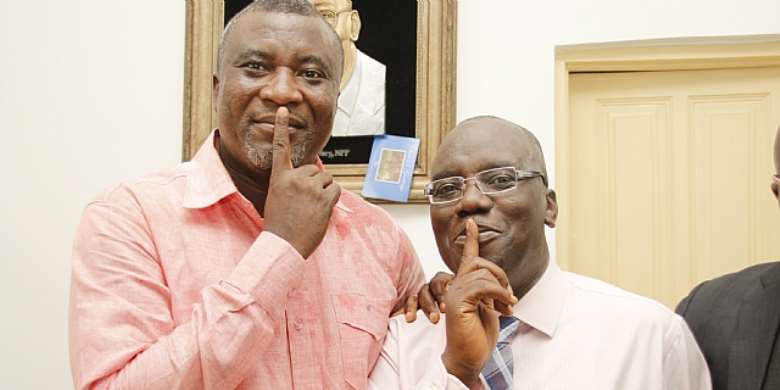 To fully appreciate the rather embarrassing inter-party battle over the control of public toilets raging between some youthful supporters of the ruling New Patriotic Party (NPP) and the main opposition National Democratic Congress (NDC), one may need to go back to events that have transpired between the youthful members and supporters of the country’s two major political parties since 2000, when Chairman Jerry John Rawlings handed over the reins of governance to the Kufuor-led New Patriotic Party, after having maintained a stranglehold on the country’s political culture for some two decades. It is almost certain that that was when the battle for the control of publicly owned facilities, especially public toilets, began.

One does not need to be on the ground to fully appreciate the fact that this battle for control over public toilets is squarely about economic control. For these toilet facilities charge members of the public fixed amounts of fees for use. And in a country with a youthful-unemployment rate of some 50-percent, according to IMF-World Bank statistics, this literally means that any seasonal change in government brings in its wake a gold rush for the acquisition of jobs by the members and supporters of the winning party.

In a winner-takes-all system like Ghana’s this is all to be expected. What is not to be expected of a society that prides itself in its exceptional civility, compared to its neighbors, is the mayhem that attends this otherwise decidedly pedestrian affair.

There are reports indicating that several citizens may even have lost their lives. And the police and the other security agencies do not seem to be capable of stemming this unsavory tide of seasonal and cyclical waves of violence. We are told by those on the ground that this is largely due to the heavy politicization of these security agencies, particularly the police, the bulk of whose membership tends to be in cahoots with members and supporters of whichever political party happens to be in power.

What this means is that something ought to be done quickly by the Interior Minister-Designate to not only reverse the tide of violence but, even more significantly, to put in place a system of professional retraining to ensure that the quality of policing in the country is upgraded to a highly professional level, to further ensure that the personnel of the Ghana Police Service (GPS), from the Inspector-General downwards, regain the trust and confidence of the public.

I have said this before and hereby reiterate the same, that an orderly and disciplined system of power transfer needs to be set up before things get way out of hand. The vow by firebrand New Patriotic Party Communications Team member Mr. Hopeson Adorye to mobilize more youthful party members to take over all public toilets in the country, must be roundly condemned, although the retaliatory basis of his recalcitrance is quite understandable.

Some grossly misguided rabidly anti-Akufo-Addo critics have even suggested the creation of more public toilet facilities, as if the raging impasse around these toilet facilities were a mere question of access or availability. I am quite certain that like everything else in the country, Ghanaians could do with the construction of more public places of convenience. However, in this particular instance, the problem is adequate skills training and employment opportunities.

Reprising the violent and virulent behavior of the National Democratic Congress’ operatives is the surest way for the ruling New Patriotic Party to quickly slip back onto the gray margins of opposition politics come Election 2020, unless clearly out-of-control operatives like Mr. Adorye are promptly made to toe the line, as it were. This well-known close associate of President Akufo-Addo’s ought to vividly recall the fact his boss and party leader vigorously campaigned for election on a policy of change and national reconciliation. Thus, vowing to “pay back” his political opponents in kind flagrantly constitutes an inexcusable betrayal of Nana Akufo-Addo’s governance agenda.