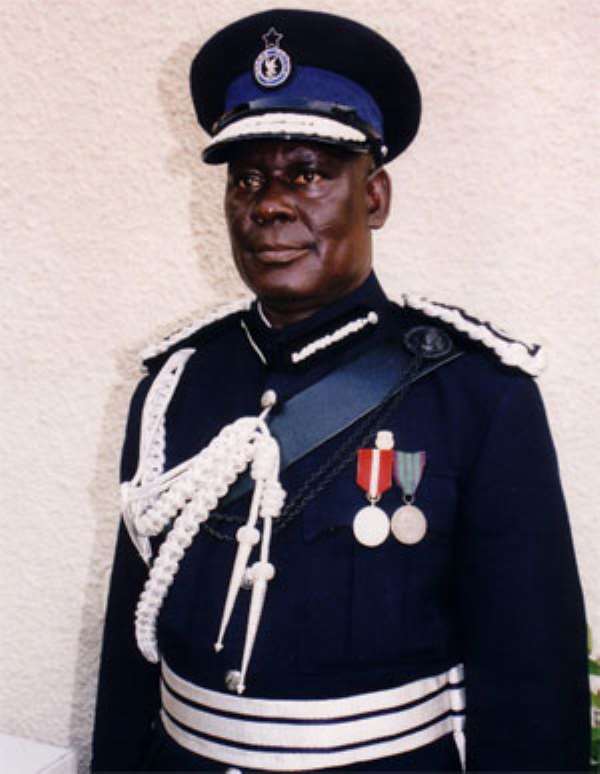 TENSION OVER AWARD FOR EX-IGP

Berekum, April 06 (Chronicle) -- Tension is heightening in Berekum over an award ceremony scheduled for next Friday to honour the ex-Inspector General of Police (IGP), Nana Owusu Nsiah.

The event is being organised by a minority group of the Berekum Traditional Council (BTC).

However, the majority group, led by the acting President of the BTC, Nana Ofori Appiah II, has warned that they, as majority, would not sit down unconcerned for the three divisional chiefs, who constitute the minority of the council, to take them for a ride.

Nana Ofori Appiah and the six other divisional chiefs who were opposing the nomination and installation of Dr. Leo Ofori as the paramount chief of the Berekum Traditional Area (BTA), stated that the former IGP does not deserve to be honoured, as far as BTC and the people of Berekum are concerned.

The former IGP and three other divisional chiefs, referred to as minority of the BTC, supported Dr. Leo Ofori's nomination and installation.

They added that Nana Owusu Nsiah, who is the Mawerehene of Berekum, did nothing better for the people of the area, but only succeeded in creating division on the chieftaincy front.

Nana Ofori Appiah, who is the Krontihene of Berekum, who was reacting to a publication in the Daily Graphic of Wednesday March 30, captioned “Berekum to honour former IGP,” emphasized that the traditional council had never met to consider honouring the former IGP, as alleged by the publication.

Others, he said, were Nana Effah Asiedu II, Akyeamehene, the Kyidomhene, all divisional chiefs of the Berekum Traditional Area and the Krontihene himself.

“The virtues of patience and tolerance cannot be exploited to mean that the BTC is weak and by that can be reduced to a cringing sycophant and or acquiescent and docile all this while,” the release added.

The release regretted that the publication displays extreme insensitivity and tactlessness on the Berekum chieftaincy dispute with respect to the position of the Omanhene and President of the BTC.

The majority upheld that, it would be callous and a show of supreme arrogance for the BTC to take a decision to honour the former IGP, Nana Owusu Nsiah, also called Nana Owusu Effah III, whilst there had been no meeting to consider the contents of the publication.

The seven divisional chiefs clearly stated that the council would not honour Nana Owusu Nsiah, as alleged by the publication.

Nana Appiah was therefore out to inform all subjects and the general public, particularly citizens of Berekum, that the BTC had not taken such a decision as portrayed.

Nana Appiah added that the content of the publication was someone's imagination, which sought to deepen the disunity that had eaten into the chiefdom of Berekum, which had been created by some disgruntled elements in the area.

The Ag. President stated that the BTC would honour its sons who are poised for peace, unity and those who bring development to the area, at an appropriate time.

He was of the view that any class of people or individuals who wish to honour the former IGP may do so, but not in the name of the traditional council.