So Could Nana Addo Be President? – Time Changes (Mmere Dane) 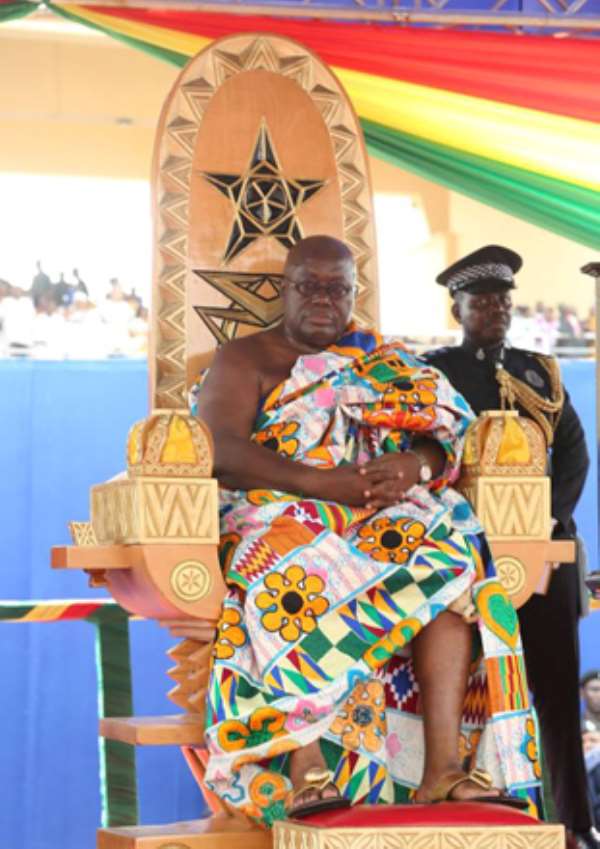 “Every great dream begins with a dreamer, Always remember you have within you the strength, the patience and the passion to reach for the stars to change the world.”

Harriet Tubman
NANA ABRE, YEN NSO Y'ABRE (Nana has suffered. We have also suffered). Yen na yennie? (Could we be the beneficiaries?). Nana Prempeh of Kitase was beside himself! He could not believe his good omen, his luck, his fortune when the results were announced, and Nana Addo had won. He says: “I do not have a pesewa to my name; I don't suppose I would earn anything extraordinary – no post, no additional wealth- but it looks as if a heavy burden has been lifted off my head.” Nana Prempeh was expressing the sentiments of the majority of Ghanaians.

Nana Addo had failed to annex the enviable crown of the President on two previous occasions: 2008, 2012 and ..wait a minute .. the person who had no dog's chance of success at the polls, surprised everyone by the overwhelming votes he garnered, whipping the young and vibrant Mahama by a whopping and unprecedented gap of over one million votes.

Not that President Akufo Addo was the first to try his luck three times at the presidency. President Atta-Mills had done it and failed in 2000 and 2004. In 2008, he had argued: a deity is consulted three times in succession for divination.

When President – to – be Nana Addo kept repeating: “The battle is the Lord's some were the critics who ridiculed him. He was mocked for humbly praying for voters to vote for him. When he and Dr Mahamadu Bawumia went to court on the 2012 Presidential Election, and the judgment went against him, he remained resolute and accepted the verdict, though he could not agree with it. What would have happened if he had failed to respect the verdict? And there were hordes of people standing by to say 'Twooboi, Yenntie'.

When the campaign heat was on, he was mocked and insulted. He was besmeared with scurrilous accusations, and wild allegations were heaped upon him—especially by 'babies with sharp teeth'. O, Nana abre. Persons who would otherwise be called 'prominent' or 'dignified' could not, would not and should not believe that Nana Addo would ever be President, and cast insinuations at him. Who are they? Where are they? They played God when they made those proclamations. Nana would not get bogged down. He could not be intimidated. He had a dream, and he sought to fulfill it.

The 'most unkindest cut' came from Nana Addo's own compatriots in the NPP and people who claimed to love NPP. Some claimed Nana Addo- not only he – his family had been cursed. Some raised a non – existent conflict between the Akan tribes, even to the point of disregarding inter-tribal marriages between people of such tribes. The rest is history.

Honourable Kennedy Agyapong may not be the loudmouthed braggart who hides his shortcomings in braggadocio. No matter the opinion people have about him, he has a large following of NPP supporters, especially the rank – and – file or grassroots men and women. He has decided to go easy on the NDC, now that his party is in power, but he cannot renege on his promise “to put (his) life on the line to save Ghana!

Ken's contribution to the success of NPP has been tremendous, notwithstanding the fact that every contribution counts, even the 'widow's mite'. Kennedy is a 'no-nonsense' man, and he is not the type that will condone corruption, (At this stage of Ghana's history, we need such dedicated, selfless men and women to guide the ship of state to safety. NPP cannot pay him sufficiently for his immense assistance. It is refreshing to hear from Kofi Badu (K.B) again. His voice on Oman FM 107.1 on Tuesday was not sonorous, but rather scintillating, invigorating and stimulating.

Those who have fleeced Ghana must advise themselves to return what they have stolen to government chest. Either they do it voluntarily or be forcibly dragged to court (not firing squad). They will meet the 'Special Prosecutor'. Remember what Mark Antonio said in William Shakespeare's 'Julius Caesar': “The evil that men do lives after them.”

All those public officials who were dealt with foul blows by the NDC can proceed to court to seek redress. The perpetrators will know that Ghana belongs to all of us, and we expect to be treated equally, I am heading for court for being sent home from the public service when my time for retirement was not due. And some tax dodgers were jubilating! We know them all. Insensitive and callous people,

NPP may not pay NDC back in their own coin. It should not be “eye for eye,” “tooth for tooth,” “hand for hand,” or “foot for foot'' as in the Mosaic edict found in Exodus 21:24. Mahatma Gandhi says: “An eye for an eye only ends up making the whole world blind.” Besides, that would be vendetta – the lingering grudge of hatred for one another, leading to a long destructive feud, in which each injury is revenged, and results in an unnecessary cycle of retaliation. Somebody would ask: “Na who cause am?” Who originated this bickering: Kwadwo Owusu- Afriyie (Sir John) and Perry Okudzeto are on the same wave – length over this. Kufour's idea of 'school feeding' gave employment to a number of women. When NDC came to power, all these women were sacked and replaced by NDC sympathisers. Now, Kofi Portuphy is crying 'wolf'; Toilet and toll booth seizures? So demeaning; it is infra dig (infra dignitatem: beneath dignity). As in Jeremiah 31: 29: “In those days they shall say no more. The fathers have eaten a sour grape, and the children's teeth are set on edge”. These are the vicissitudes of life.

One cannot but relish the answers provided at the vetting of the ministers – elect, notably Osafo Maafo, Ken Ofori Attah, Kan Dapaah,, Agyarko, Alan Kyeremateng and Matthew Opoku (NAPO)—who else?. Their mouths bespeak the true sense of commitment and as Lollah Gifty Akita says in 'Pearls of Wisdom': “The deed of the light are goodness, righteousness and faithfulness.”

Should the NPP succeed, Nana Addo's sweat and struggle will not have been in vain. It remains for the NDC to purge themselves of what Rawlings, the owner of the party calls the action of the “uncouth, uncultured selfish and greedy characters.” Meanwhile until last Tuesday (24th January) some people did not know that security men guarding the Jubilee House could be so polite and so helpful. Refreshing change!

The author has 151 publications published on Modern Ghana.