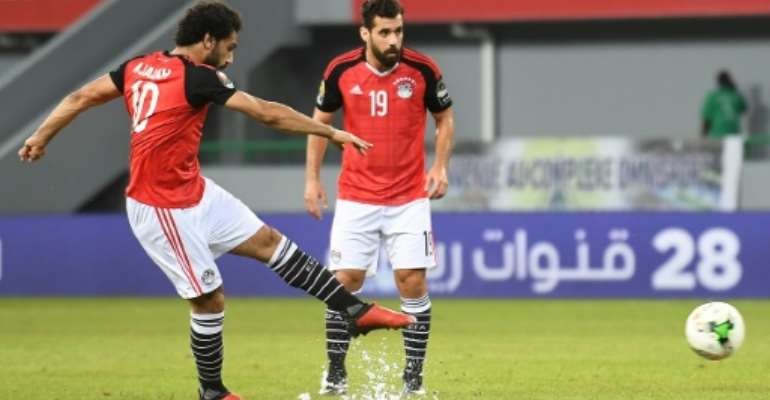 Egypt's forward Mohamed Salah (L) takes a free kick to score a goal during the 2017 Africa Cup of Nations group D football match against Ghana in Port-Gentil on January 25, 2017. By Justin TALLIS (AFP)

Port-Gentil (Gabon) (AFP) - Mohamed Salah's thumping early free-kick gave Egypt a 1-0 win against Ghana on Wednesday as they sealed their place in the quarter-finals of the Africa Cup of Nations.

The record seven-time winners of the competition only needed a draw to be certain of going through but the victory at a barely half-full stadium allowed them to leapfrog already-qualified Ghana and finish on top of Group D.

Hector Cuper's solid side, who have not conceded a goal yet in Gabon, will now stay in the port city of Port-Gentil for a last-eight tie against Morocco on Sunday evening.

"It's difficult to come out and play for a draw. We came out to win from the off. I am not as happy with the performance as I would like but I think given who we were up against I have to be satisfied," said Cuper.

"We will have a bit of a breather now, rest a bit, and then start thinking about Morocco. 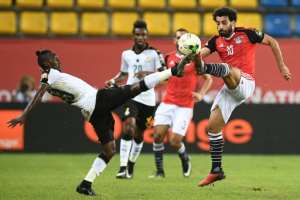 "Our ambition is very high and we are going to fight to keep progressing and reach the final stages."

Ghana, meanwhile, must now up sticks to Oyem in the north of the country for a quarter-final against an impressive DR Congo.

"I don't think it matters," said Ghana coach Avram Grant. "I said before the two teams we could have played were good and it would be a tough game.

"I hope the pitch there will be better, but I'm not sure about this."

If going to Oyem does not bother the Black Stars and Grant too much given the state of the surface in Port-Gentil, an injury to skipper Asamoah Gyan might.

Gyan was making his 99th international appearance and was looking to score his 50th goal for his country, but he went down with what looked like a groin injury towards the end of the first half and eventually came off. 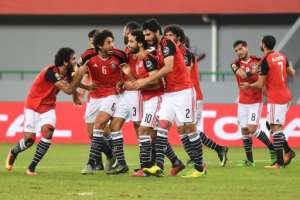 Egypt teammates celebrate after scoring a goal during the 2017 Africa Cup of Nations group D football match against Ghana January 25, 2017

Jordan Ayew replaced him, but Grant looked ashen-faced at the prospect of being without his captain for the quarter-final as Ghana look to win a fifth Cup of Nations and a first since 1982.

The 2015 runners-up only needed a draw to secure first place and Grant made several changes to his team, including handing a start to London-born Andy Yiadom at right-back.

But Egypt went in front in the 11th minute thanks to a moment of inspiration from their star man Salah, the Roma player smashing home a free-kick on his left foot from 23 yards that left Razak Brimah in the Ghana goal rooted.

Once again the shocking surface made flowing football almost impossible, and chances were few and far between.

A poor clearance by Razak almost gifted Egypt a second goal, but Marwan Mohsen's floated effort from the edge of the area landed on the roof of the net.

The Egyptian defence stood firm in the second half and their 44-year-old goalkeeper Essam El Hadary was only truly tested twice.

First he spooned away a powerful long-range strike by Emmanuel Agyemang Badu midway through the second period, and then he flew high to his right to save from Jordan Ayew in the 90th minute.