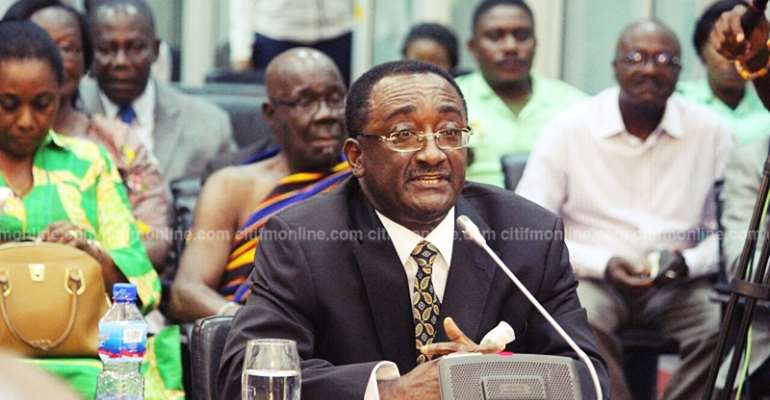 President Akufo-Addo's Minister of Agriculture nominee, Dr Owusu Afriyie Akoto has rubbished claims he is promoting the introduction and use of genetically modified seeds in the country.

According to him, his calls have only been for the use of improved seeds developed by Ghanaian scientists to enhance crop production and earn farmers more income.

The nominee has been criticised by various farmer groups over his supposed support for the introduction of genetically modified (GMO) foods into the country. The groups say Mr Afriyie Akoto has been in support of GMO, which has subtly been captured in the Plan Breeders Bill currently before parliament.

Food Sovereignty Ghana (FSG), a grassroots food advocacy movement have raised serious concerns over the use of genetically modified seeds which they say have long-term effects on the health of consumers and quality of the soil.

The movement, recently petitioned Parliament's Appointment Committee to disqualify Mr Afriyie-Akoto over his stance on the subject but according to him, the calls are misplaced.

Addressing Parliament's Appointments Committee on Tuesday to be vetted for his ministerial position, the Kwadaso legislator said his position is not to bring GMO in the country.

“I think this whole thing is misplaced. The science which exists, and which has produced these 40 different improved varieties for our farmers of maize, rice and others, we have hardly used it. Only 11% of maize farmers are using improved seeds. There rest are using local varieties which is getting them nowhere. The task really is to ensure that the bulk of farmers adopt these improved seeds, get them fertilizers and extension so that our production can take off. It is not to bring some GMO into this country,” Dr Afriyie Akoto said.

He added that, “whoever says I am promoting GMO is not correct. I believe in Ghanaian scientists, Ghanaian scientists have done well. This 'obaatampa' [breed] is all over West Africa… All these other improved seeds that our research have been putting their backs to the wheel will earn scientists in this country some money in the future and not some GMO which is not going to benefit anybody,” Dr Afriyie Akoto said.

Some Members of Parliament have expressed worry that government's cocoa scholarship program which was introduced to support the education of children of rural cocoa farmers had been supporting more urban dwellers instead but Mr Afriyie-Akoto said if he is given the mandate by the President, he will ensure that the trend is reversed.