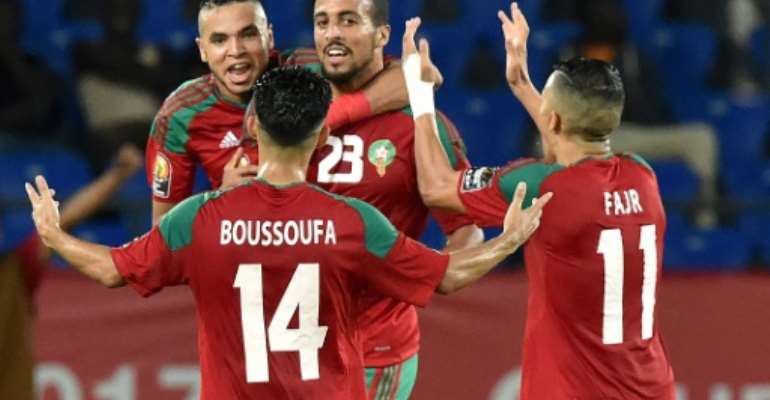 Morocco's midfielder Rachid Alioui (C) celebrates with teammates after scoring a goal during the 2017 Africa Cup of Nations group C football match between Morocco and Ivory Coast in Oyem on January 24, 2017. By ISSOUF SANOGO (AFP)

Oyem (Gabon) (AFP) - Title-holders the Ivory Coast were dumped out of the Africa Cup of Nations Tuesday after a superb Rachid Alioui goal gave Herve Renard-coached Morocco a 1-0 win in Gabon.

Clinching a quarter-finals place was particularly sweet for Frenchman Renard, the coach of the Ivorians when they won the biennial tournament two years ago.

He guided outsiders Zambia to glory in 2012 and repeated the feat with perennial underachievers the Ivory Coast three years later.

The winning goal came on 64 minutes from France-based Alioui and set up a last-eight showdown against the Group D winners in Port-Gentil Sunday.

Democratic Republic of Congo beat Togo 3-1 in the other Group C match to top the standings with seven points followed by Morocco (six), Ivory Coast (two) and Togo (one).

"I think that when you get a win, you always have to be realistic," stressed Renard. "Today we beat a team from Ivory Coast on a bad field and it surely levelled the values.

"A new competition that starts with the knockout matches, which will look like this one, where you need a winning mind."

Rival coach and fellow Frenchman Michel Dussuyer said: "It is a huge disappointment, I feel for all Ivorians.

"We had the ambition to go through (to the knockout phase) and keep our title -- tonight is going to be tough." 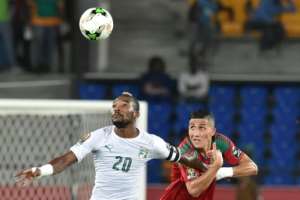 As the match kicked off twice champions Ivory Coast knew they had to win while a draw would suffice for Morocco, whose only title came 41 years ago.

The Ivorian Elephants and the Moroccan Atlas Lions were renewing a long rivalry with the last episode a 0-0 World Cup qualifying draw in Marrakech two months ago.

Both teams rattled the woodwork during a first half which ended 0-0 after the Ivory Coast dominated possession in the northern town of Oyem.

Moroccan Faycal Fajr struck the crossbar from a free-kick on 25 minutes with his curled right-foot attempt eluding goalkeeper Sylvain Gbohouo.

Rival shot-stopper Munir Mohamedi made a good reflex save eight minutes before half-time to push away a shot from Wilfried Zaha, who was set up by a superb Salomon Kalou pass.

Veteran Kalou went even closer just before the break with a far-post header that beat Mohamedi but went wide of the post.

As the game passed the hour mark the scoreboard operator remained unemployed due to a cagey clash in which even half-chances were scarce.

The deadlock ended, however, with a world-class goal from Alioui.

When the ball was played inside to him, Alioui steered a lofted shot from well outside the box over Gbohouo and into the corner.

With a quarter of the match remaining in a stadium surrounded by rubber plantations, the defending champions had to score at least twice to survive but never looked like doing so.