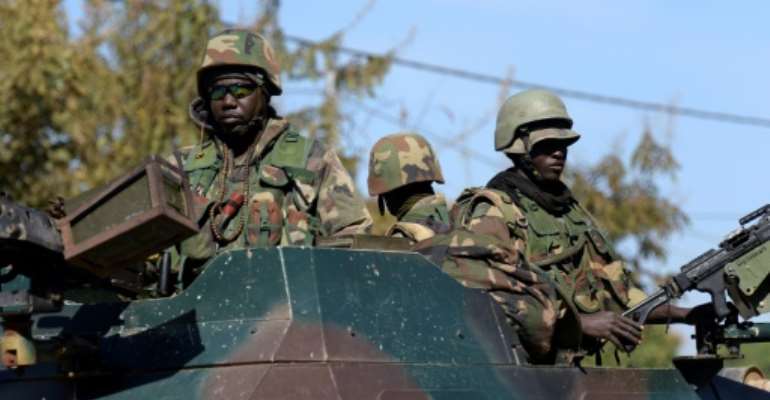 Soldiers patrol in the Gambian town of Soma on January 23, 2017. By SEYLLOU (AFP)

Banjul (Gambia) (AFP) - The Gambia on Monday awaited the arrival of President Adama Barrow as his team said former strongman Yahya Jammeh plundered the nation's coffers before going into exile.

Barrow, who was sworn in as the new head of state on January 19 at his country's embassy in neighbouring Senegal, has put off his return over fears for his safety.

His team refused to confirm to AFP on Monday exactly when he expected to return. 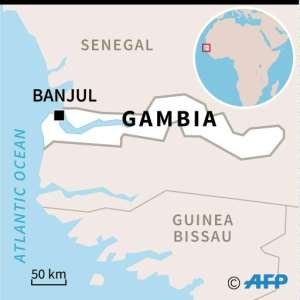 An aide to Barrow meanwhile accused Jammeh of emptying the state's coffers by plundering millions of dollars in his final days in power.

"Over two weeks, over 500 million dalasi ($11 million) were withdrawn" by Jammeh, Mai Fatty said. "As we take over, the government of The Gambia is in financial distress."

"The coffers are largely empty."

After 22 years of iron-fisted rule, Jammeh refused to recognise the result of a December 1 election won by Barrow, triggering a weeks-long political crisis. 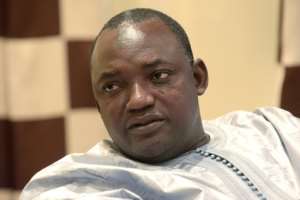 Gambian President Adama Barrow was sworn in as the new head of state on January 19, 2017 at his country's embassy in neighbouring Senegal

But under the threat of a regional military intervention, he chose exile in Equatorial Guinea, which is not party to the International Criminal Court.

That means he cannot be extradited in the event he is charged with crimes against humanity or other serious offences.

Barrow's spokesman Halifa Sallah told AFP on Sunday that Barrow aimed to set up a truth and reconciliation committee, his "preferred method" of dealing with grievances against the regime, though many Gambians want Jammeh and his entourage to be prosecuted.

Sections of the security services were under Jammeh's personal control and are responsible for extrajudicial killings, torture and arbitrary detention, rights groups say. 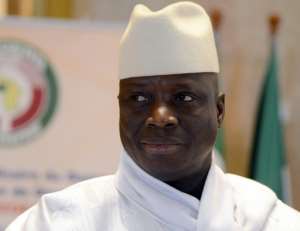 Sallah added that Barrow had written a letter that "indicated that (Jammeh) would be treated as an ex-president, with the same rights and privileges as Dawda Jawara," the country's only other president since independence.

That includes immunity from prosecution, according to The Gambia's constitution, unless two thirds of the national assembly votes to assert that legal proceedings are in the public interest.

On Monday, staff were working to ensure the presidential palace was safe for Barrow to enter. 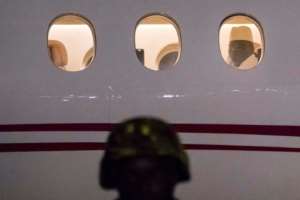 Former president Yaya Jammeh, who led Gambia for 22 years, looks through the plane window as he leaves the country on January 21, 2017 from Banjul airport

While he is eager to return "as soon as possible", according to Fatty, "the state of security in The Gambia is still fragile."

He said that Barrow hoped some of the 7,000 troops mobilised earlier this month by Senegal and four other nations would remain in place after his arrival.

A military aide to Barrow was due to be dispatched "to work with the security chiefs" of the army and police and finalise plans for his entry into the country, Sallah said.

Gambians looked on in disbelief at the empty State House in Banjul on Sunday night, unable to believe it had finally been vacated, while cheering on and thanking the Senegalese troops.

"I was born and raised in Banjul. Good riddance!" said Mohammed Jallow, a 54-year-old businessman.

"Barrow has a lot of work to do. He's inheriting a very bad situation," he added. 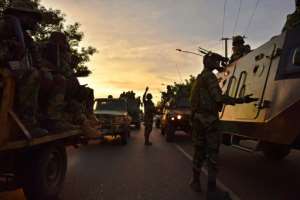 Chief of defence staff Ousman Badjie told AFP the Malian, Senegalese, Togolese, Nigerian and Ghanaian soldiers "are our brothers," adding "we are happy that they are here to complement our efforts."

But critics have raised concerns over a statement issued by the United Nations, regional bloc ECOWAS and the African Union that seemed to offer Jammeh comfortable guarantees.

The statement said "no legislative measures" would be taken that would infringe the "dignity, security, safety and rights" of Jammeh or his family, noting that he could return when he pleased and that property "lawfully" belonging to him would not be seized.

That clause will be especially contentious after Jammeh was accused of plundering The Gambia's coffers.

But Reed Brody, a lawyer involved in the landmark conviction of former Chadian dictator Hissene Habre, said Gambian law could not halt a prosecution if the evidence against Jammeh was serious enough.

"International law prohibits amnesties for atrocities such as torture and crimes against humanity, and internal United Nations rules even prevent the UN from agreeing to any such amnesty," he told AFP by email.

More Gambia
Modern Ghana Links
Secretary-General makes first official visit to The Gambia after it re-joined Commonwealth
We have not filed case against Ghana and Gambia at ECOWAS Court, but we will if….Victims of Gambia Massacre
Gambia: parents raise safety concerns amid schools reopening during the Covid-19 pandemic
Widespread disappointment in Gambia after new constitution voted down
Gambia: Report Recommends Changes To Laws That Discriminate Against Women
Gambia government ravaged by COVID-19
Re: Concerns Over The Arbitary Arrest/Harrassment Of Mr. Madi Jobarteh And The Deteriorating State Of Freedom Of Expression In The Gambia
Together We Can Fight COVID-19—Mamina Bojang, Deputy Matron, The Gambia
Gambian man in US charged with torturing prisoners in home country
Dossiers Quotes Coronavirus
TOP STORIES