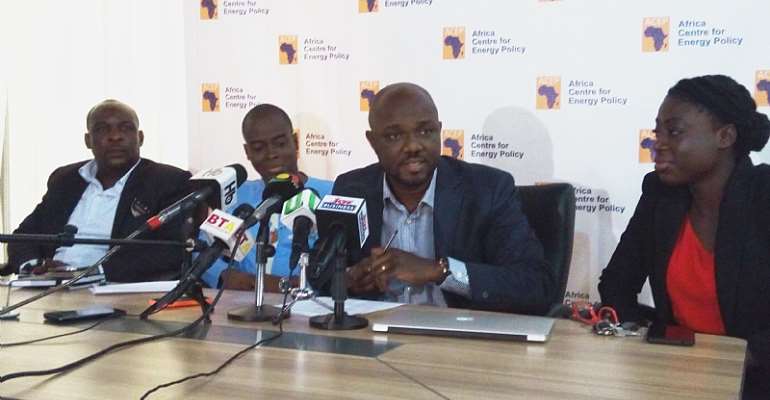 The Africa Centre for Energy Policy (ACEP) is calling on the new government to renegotiate the terms of the AMERI, Karpower and AKSA contracts entered by the previous NDC government to provide relief to consumers.

Speaking at a news conference in Accra, the Deputy Executive Director of ACEP, Ben Boakye said they are convinced that value for money was not achieved in those contracts.

“We urge government to take a critical look at the nonperforming agreements and where companies have failed to fulfill their work obligations, take steps to punish them or abrogate those contracts. The remedy into the future is to ensure that there is aggressive investment attraction drive through the application of the new Petroleum Act 2016, which set in motion the transparent process of awarding petroleum contracts through competitive bidding,” he stated.

Mr. Boakye noted that government must fulfill its manifesto promise to conduct a technical audit of power sector infrastructure, and develop and implement a 10 year master plan.

He indicated that this audit is relevant to ascertain the efficiency and robustness of the power sector infrastructure to serve our need for a stable power supply.

Mr. Boakye further urged the new government to fulfill its promise by reducing taxes on electricity tariffs to provide immediate relief to households and industry.

The Deputy Executive Director noted that the 17.5% VAT on industrial consumers should as a matter of urgency be removed to improve the cash flow of businesses and their productivity.

On the downstream sector, he indicated that the falling crude oil price in 2015 allowed government to impose new taxes and levies on petroleum products.

According to him, these include the Special Petroleum Tax (SPT) of 17.5% and the price stabilization and Recovery Levy of 12 pesewas and 10 pesewas on petrol and diesel respectively.

Mr. Boakye said now, with the combined effect of weak currency and the rising crude oil price, these levies are beginning to bite consumers.

He proposed that the new government should Review Levies on Petroleum Products by Scraping the price stabilization levy and account for collection in 2016 which they estimate to be in excess of GHS 500million.

“This is an element of regulation which has no place in a deregulated market,” he noted.

Mr. Boakye emphasized that convert the SPT from 17.5% to a fixed levy to eliminate the compounding effect of the tax on ex-depot price of products in the midst of rising crude oil price and a weakening cedi.

He urged the new government to complete the deregulation process of the downstream market to ensure the removal of the biweekly pricing window to achieve automatic adjustment of market prices.

Election 2020: You'll have ‘fugitive’ president should Maham...
59 minutes ago