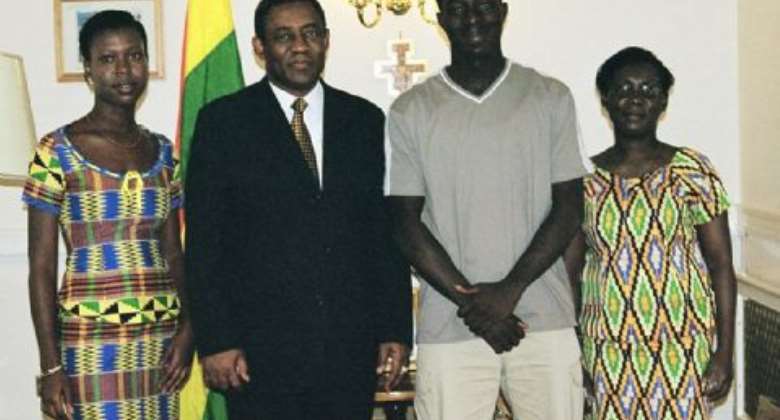 A One-Day Youth Commonwealth Heads of Government Meeting (CHOGM) attended by over 80 delegates drawn from Commonwealth countries has ended in London.

Deliberations at the meeting held as part of this year's Commonwealth Day celebrations centred on the theme for the celebrations “Education- Creating Opportunities, Realising Potential”

In keeping with the conventions of the meeting, the participants aged between 13 to 24, were assigned to represent different countries to encourage them to learn about other Commonwealth countries.

In this regard, Mr. Dennis Bandoh, a second year Architecture student of the Kwame Nkrumah University of Science and Technology and Ms Fatali Gantou, a third year student of the Tema Secondary School, the two delegates from Ghana were assigned to represent Zambia while the two delegates from Canada were assigned to represent Ghana.

In his intervention, Mr. Bandoh observed that the Youth CHOGM provided an excellent platform for young people to share and exchange views on pertinent issues affecting their development and other global issues. He also noted that the meeting afforded the youth from Commonwealth countries the opportunity to prepare themselves to take up the mantle of leadership in their respective countries.

Participants at the meeting also re-affirmed the importance of access to education as a basic human right. They stressed that the recent up-surge in terrorism could be attributed to lack of education.

The Ghanaian delegation to the Youth CHOGM later paid a courtesy call on Ghana's High Commissioner to the UK, H.E. Mr. Isaac Osei. They were accompanied by Ms Christine Borsah, Founder and Chairperson of the Africa Children's Club, sponsors of the delegation.

Speaking during the call, Mr. Osei praised the Ghanaian delegation for the incisive contributions they made at the Youth CHOGM. He expressed the hope that the exposure would not only ginger them to achieve excellence in their academic work but would also help them to deepen appreciation for the values and ideals of the Commonwealth.