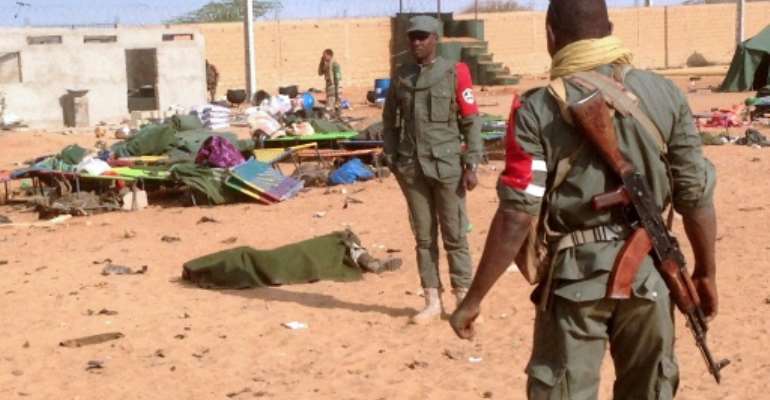 The body of a dead soldier is covered with a blanket after a suicide bomb attack ripped through a camp of former rebels and pro-government militia in northern Mali on January 18, 2017. By (AFP)

The car bomb attack on Wednesday in Gao, the region's biggest city, targeted a camp housing former rebels and pro-government militia who are signatories to a 2015 peace accord struck with the government.

The group of Algerian jihadist and Al-Qaeda ally Mokhtar Belmokhtar claimed responsibility, in a statement, for the suicide bombing.

The group, allied to Al-Qaeda in the Islamic Maghreb (AQIM), identified the attacker as Abdelhadi al-Foulani, in a statement cited by the US-based SITE watchdog and Mauritanian news agency Al-Akhbar.

The attack occurred as former rebels from the Tuareg-led CMA movement prepared to go on a joint patrol with pro-government militia members, under the terms of the peace deal.

The United States condemned the bombing, describing the attack as "cowardly". 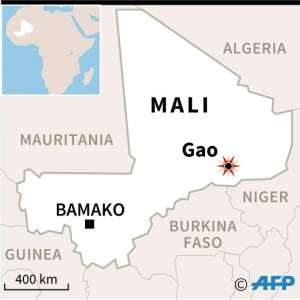 "We also denounce in the strongest terms all efforts to derail implementation of the peace agreement in Mali," State Department Spokesman Peter Kirby said.

Mali's north fell under the control of Tuareg-led rebels and jihadist groups linked to Al-Qaeda in 2012. The Islamists sidelined the rebels to take sole control.

Although they were largely ousted by a French-led military operation in January 2013, implementation of the peace accord has been piecemeal with insurgents still active across large parts of the region.

The joint patrols, which also include regular Malian army troops, are supposed to help prepare for the reorganisation of the army.

"The provisional toll is 47 dead, including five suicide bombers, and several dozen injured", the government said in a statement.

A Malian military source told AFP that 53 people had been killed and 110 injured.

The UN peacekeeping mission MINUSMA said in a statement that "dozens of deaths and dozens of injuries are reported among the 600 individuals hosted in the camp". 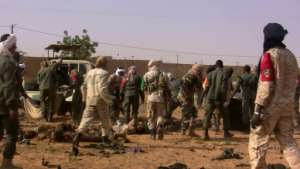 The dead and injured are evacuated following a suicide bomb attack that ripped through a camp grouping former rebels and pro-government militia in Gao, in the troubled northern Mali left 50 people dead on January 18, 2017 in Ga

The attack took place at 0840 GMT as the former rival groups "were due to soon leave on a joint patrol," a MINUSMA source added.

The powerful blast, which went off during a training session, ripped apart bodies, scattering limbs across the camp, a witness said.

The vehicle used in the blast bore the logo of the unit coordinating the joint patrols, army spokesman Diarran Kone told AFP.

The assailant "came to town alone to procure equipment and fit the vehicle out to commit a suicide attack", a Malian security source who asked not to be named told AFP.

The camp is very close to Gao airport, a key transport hub which was closed briefly in late November following an attack blamed on jihadists.

The car bomb destroyed prefabricated hangars used by MINUSMA's aircraft and damage to the installations and debris on the runway made the airport temporarily unusable.

"The joint patrols were the target," French Foreign Minister Jean-Marc Ayrault told French media on Wednesday. "The political aim is to hamper the peace process and reconciliation."

France is considering a UN Security Council draft resolution that would set up a sanctions regime for Mali to target opponents of the peace deal signed 19 months ago.

The UN Security Council met Wednesday and agreed to consider setting up a sanctions regime for Mali to punish those who are hindering the struggling peace deal.

The proposed sanctions regime would set up a mechanism to allow individuals and entities to be blacklisted by the United Nations. Targeted sanctions include a global travel ban and an assets freeze.

The United Nations has deployed 13,000 troops in Mali to serve in the MINUSMA force, considered one of the deadliest missions in peacekeeping.