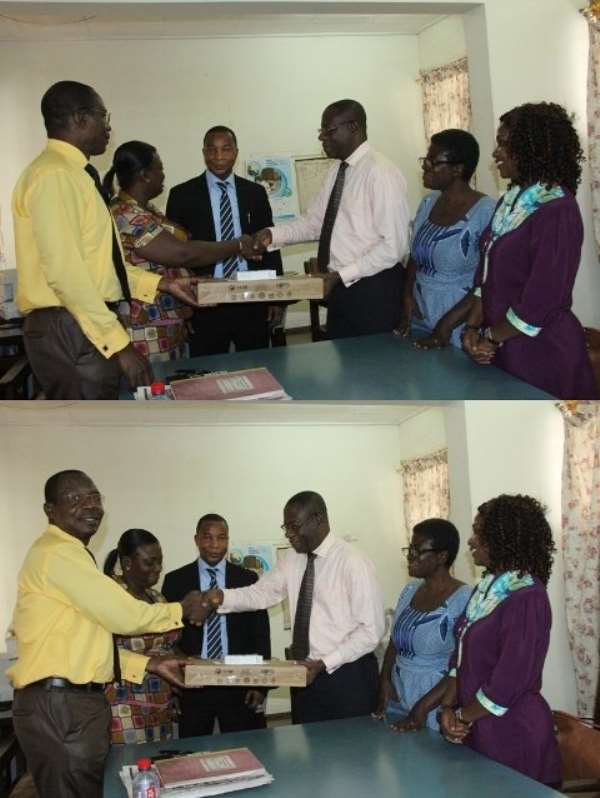 Mr Kanyi, who is expected by his benefactor to continue to write more stories on child protection, also received a laptop and a voice recorder.

His story,' My baby, my farm,' won him the Award under the 2015 Ghana Journalists Association (GJA) Awards, which was celebrated in August 2016.

Mr Affail Monney, the President of GJA, who made the presentation to Mr Kanyi, lauded him for his sterling performance in journalism and dedication to the cause of the Association.

He urged media practitioners, particularly, those in the GNA, not to be motivated by personal gain in the performance of their work but put in their best efforts for God and country.

'Seek ye first the professional excellence and all other things shall be added,' Mr Monney said.

'Coming to GNA always brings a nostalgic memory to those days when GNA reporters worked with such excellence and urgency that many of their colleagues in other newsrooms waited for their reports to copy in order to do a good job.

'I am talking about the days of Kwaku Sakyi-Addo, Frank Agyekum, Bright Blewu and many others, and I wish to advise the present generation of reporters to rise above whatever challenges that exist to bring the GNA back to the media spotlight it ought to occupy.'

Mr Monney, however, acknowledged that the GNA still had very good hands, such as Mr Kanyi, who were contributing to the advancement of the nation through journalism, and encouraged such fellows to submit their work for the consideration of awards.

'The 2016 GJA Awards will open in due course for nominations and I encourage all journalists with outstanding stories, especially those in GNA to participate and win in honour of their institutions,' he said.

Mr Rex Annan, the acting General Manager of the GNA, praised Mr Kanyi for his commitment to duty, saying he was a good example of young reporters worthy of emulation.

'You have excelled today because you work selflessly for the good of the Agency and Ghana as a whole,' he said.

Mrs Yaa Oforiwah Asare-Peasah, the Acting Director Editorial of the GNA, also commended Mr Kanyi for his outstanding performance that had raised him to the ladder in his career, saying: 'You have worked very hard and proven me right, as I keep telling my reporters not to think of today's rewards but that of the future.'

Mrs Linda Asante-Agyei, the GJA Treasurer, said it was unfortunate that many reporters in the Agency were not interested in participating in the Awards Scheme because the few who had entered over the years always won.

She, therefore, urged the Management of the Agency to motivate their reporters to compete for the awards.

Mr Kanyi, for his part, said: 'I am very excited for the recognition and happy for the kind words.

'My joy is seeing the GNA among the award winners, and this is my motivation but not what to get from it.'

He thanked GNA, GJA and World Vision for the opportunities as well as the appreciation of his little quota towards the development of Mother Ghana.

In all, a total of 19 journalists were honoured out of 163 entries submitted for the 21st GJA Awards held last year on the theme: 'Media for Undisputed and Peaceful 2016 Election: The Support of Civil Society.'