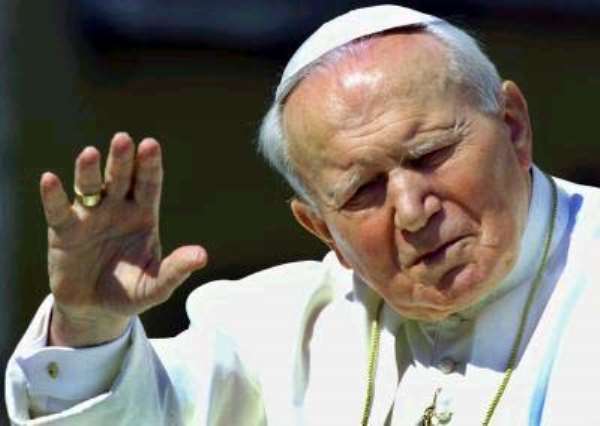 "The Holy Father died this evening at 21.37 in his private apartment," the statement said.

The news was immediately announced to huge crowds gathered in St Peter's Square.

John Paul will be remembered for his role in the collapse of communism in Europe and his unyielding defense of traditional Vatican doctrines as leader of the world's 1.1 billion Catholics.

Huge crowds had staged a tearful vigil in St. Peter's Square, praying for a man already being dubbed by some Catholics as "John Paul the Great."

The Pope's health had deteriorated steadily over the past decade and earlier this year took a sharp turn for the worse.

The Pontiff, once a lithe athlete and powerful speaker, was already racked by arthritis and Parkinson's Disease, his voice often reduced to a raspy whisper.

He was rushed to hospital twice in February and had to have a tracheotomy to ease serious breathing problems. But he never regained his strength from the operation and failed dramatically on two occasions to address crowds at St. Peter's Square.

On Wednesday doctors inserted a feeding tube into his stomach to try boost his energy levels. A day later he developed a urinary infection and high fever that soon precipitated heart failure, kidney problems and ultimately death.

According to pre-written Church rules, the Pontiff's mourning rites will last 9 days and his body is likely to be laid to rest in the crypt underneath St Peter's Basilica.

The conclave to elect a new Pope will start in 15 to 20 days, with almost 120 cardinals from around the world gathering in the Vatican's Sistine Chapel to choose a successor.

There is no favorite candidate to take over. Karol Wojtyla was himself regarded as an outsider when he was elevated to the papacy on Oct. 16, 1978.

Few would have predicted then that the first non-Italian Pope in 455 years would throw off the stiff trappings of the papacy, travel the globe and leave an indelible mark on history.

In over a quarter century on the world stage, he was both a champion of the downtrodden and an often contested defender of orthodoxy within his own church.

Historians say one of the Pope's most lasting legacies will be his role in the fall of communism in Eastern Europe in 1989.

"Behold the night is over, day has dawned anew," the Pope said during a triumphant visit to Czechoslovakia in 1990.

A decade after witnessing the fall of communism, he fulfilled another of his dreams. He visited the Holy Land in March 2000, and, praying at Jerusalem's Western Wall, asked forgiveness for Catholic sins against Jews over the centuries.

But while many loved the man, his message was less popular and he was a source of deep division in his own church.

Critics constantly attacked his traditionalist stance on family issues, such as his condemnation of contraception and homosexuality, and hope the next Pope will be more liberal.

However, he has appointed more than 95 percent of the cardinals who will elect his successor, thus stacking the odds that his controversial teachings will not be tampered with.