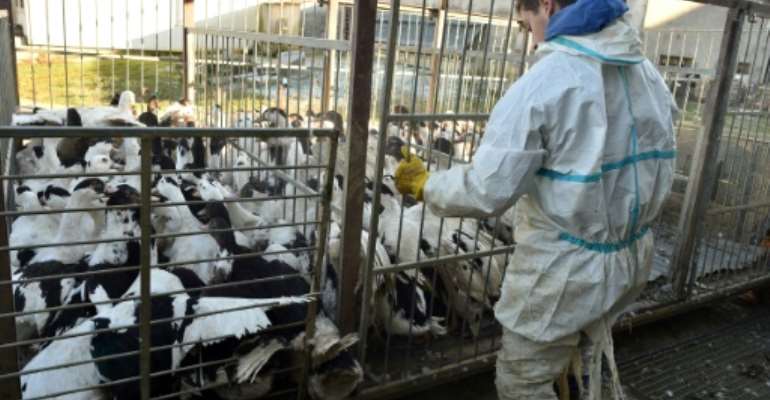 Ducks are unloaded at a farm in southwest France on January 6 ahead of their slaughter, part of a mass bird cull to stem the spread of bird flu. By REMY GABALDA (AFP/File)

Kampala (AFP) - Uganda announced Sunday it had detected bird flu among migratory birds, without specifying whether it was the particularly virulent H5 strain detected this season in countries worldwide.

The agriculture ministry said bird flu had been detected in two spots, one near Entebbe, on the banks of Lake Victoria, and another in the Masaka distict about 120 kilometres (75 miles) west of Kampala.

Five domestic ducks and a hen in Masaka were also infected, leading authorities to call for all poultry to be kept inside to avoid further contagion from migratory birds, it said.

In a statement, Christopher Kibazanga, minister for agriculture, animals and fisheries, said local wildlife authorities on January 2 had reported the "mass death of wild birds, seen by fishermen at Lutembe beach at the shores of Lake Victoria near Entebbe".

Another report arrived on January 13 from the Masaka district, and in both cases the specimen tested positive for "the highly pathogenic avian influenza that affects both humans and animals and which causes a high number of deaths in both species", the statement added.

The ministry said the outbreak was a first for Uganda but did not specify which flu strain it was.

Europe is battling the spread of H5N1, culling millions of birds on farms and moving them indoors to avoid contagion from infected wildlife.

The strain can be transmitted to humans, and is held responsible for the deaths of several hundred people since 2003.